Last camping opportunity for us

Camping near Punta Indio on the Camping Municipal Sarandi on the Atlantic coast was probably going to be one of the last times on our extended journey.

We took the RP11, passed Reserva Natural El Destino ( which also seemed to offer camping), drove through the town Magdalena and reached La Plata – a busy and larger city. We successfully navigated with our Pocket Earth App. like we have done so many times before , until we reached the natural science museum, the Museo de Sciencias Naturales, founded by Perito Moreno in 1884 for the university. 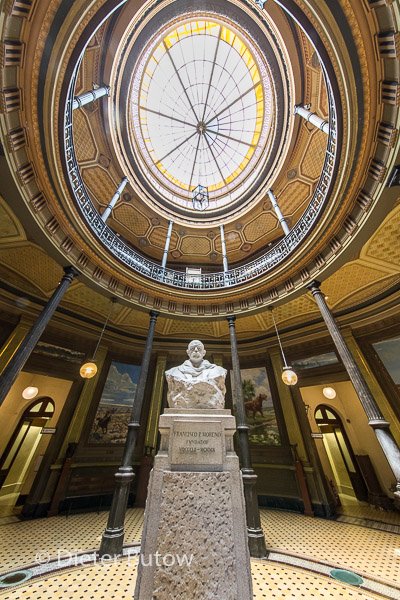 This is a museum worth visiting and it covers many natural science topics and houses more than 3 million objects. 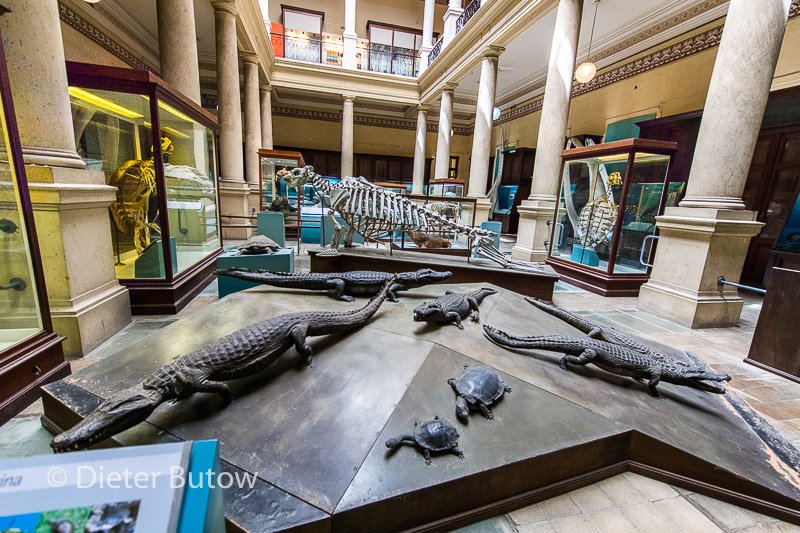 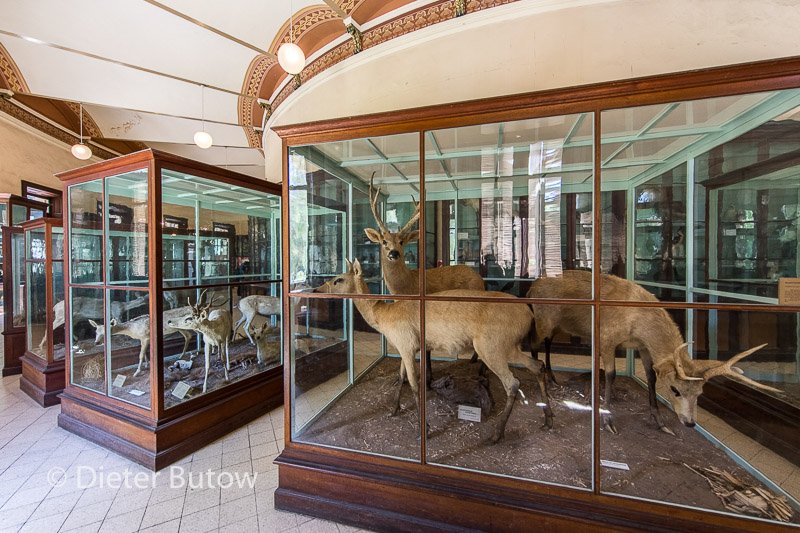 Needless to say that the day we spent there only afforded us a narrow view of the broad topics covered. If you had the time, you could easily set aside 2-3 days here. Siblings Nicolas and Camilla Kass, two reptile biologists we met at Talampaya and who gave us the tip ( they work here) were unfortunately in Thailand when we visited. 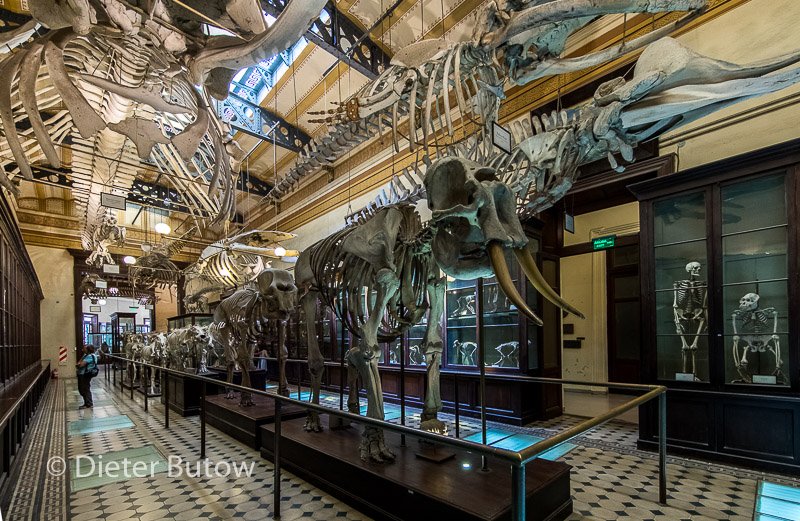 Very impressive to us was the collection of skeletons of all types of animals from all over the globe. Ever imagined what a leatherback turtle would look like from the inside?

Having spent the day at the museum, it left us no time to visit the cathedral on Plaza Moreno – apparently another impressive sight in La Plata.

We left on time to avoid major traffic and reached the suburb Florencio Varela in Buenos Aires, where our new-found friends Luciano and Natalia with daughter Valentina and mother Sara lived and awaited us.

They never thought we would stop by and the following 3 days we enjoyed with them a number of outings to explore BA. “Mi casa es su casa” -their home became ours as they moved out and stayed with family – what extraordinary gesture of hospitality accommodating strangers! They also insisted to take us into the city – an hour’s drive from where they lived. In return we reciprocated inviting them to a city tour by bus, which they had never done. 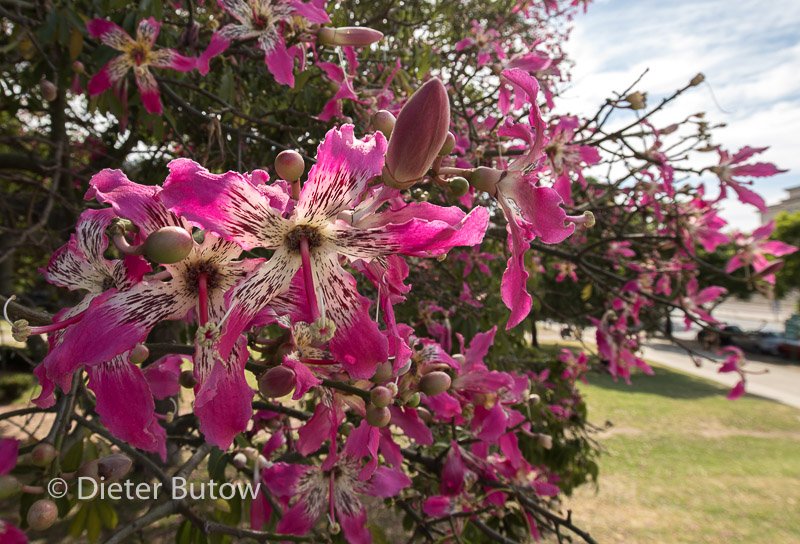 A Red Bus roundtrip of BA can be recommended to get an overview of the city and its surrounds – not to be missed is the artist suburb of Boca Boca with its vivid colours and laid-back Tango cafés. It is also the home to one of the most famous Argentinian football teams, Boca Juniors – unfortunately the suburb is not safe to walk all backstreets and one is advised to stay within the main touristic area. 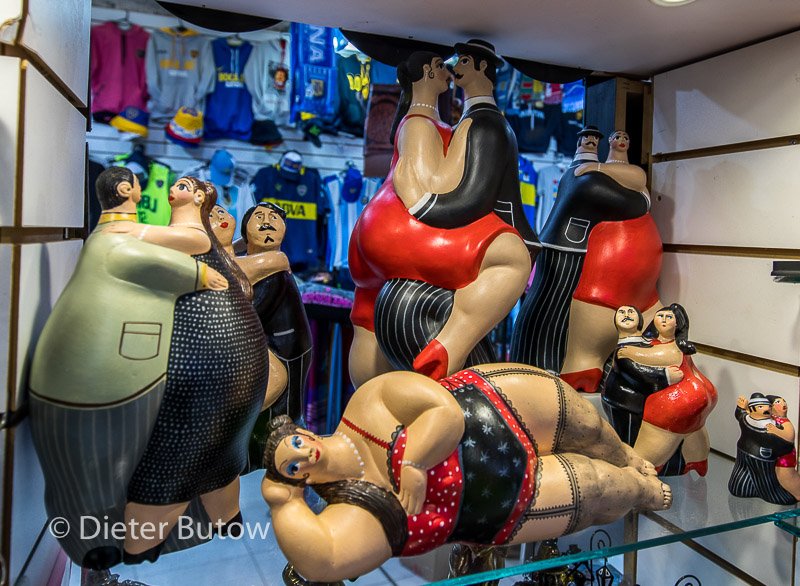 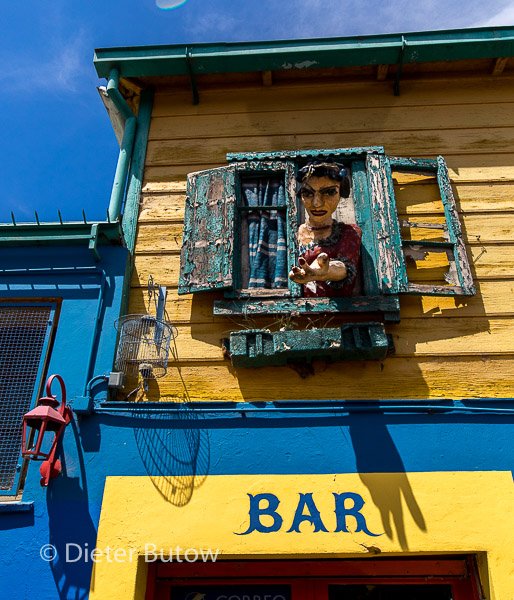 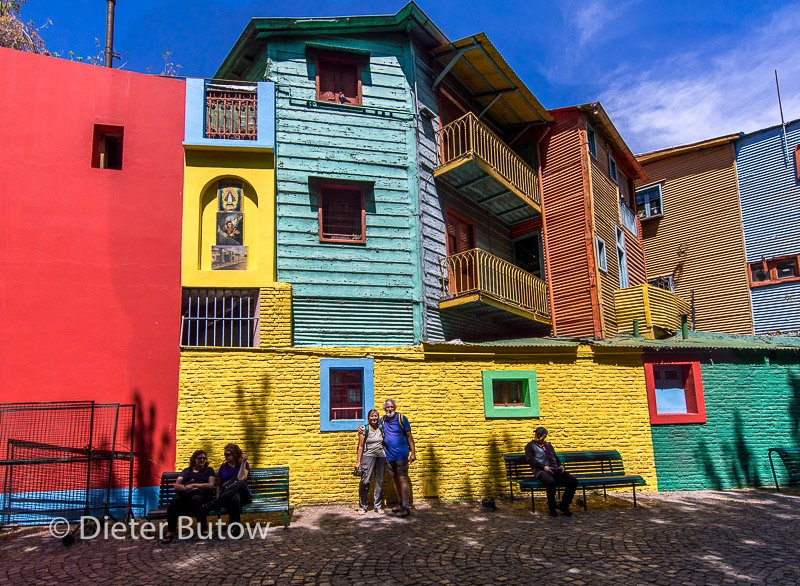 When in BA a visit to the famous cemetery in Recoletta, where Evita Peron ( look for the Duarte burial chamber, her maiden name) is buried – recognizeable by the many who visit her last resting place.

Sara, Luciano’s mother joined in and together we also visited Tigre – the home of our Cape Town Spanish teacher José. 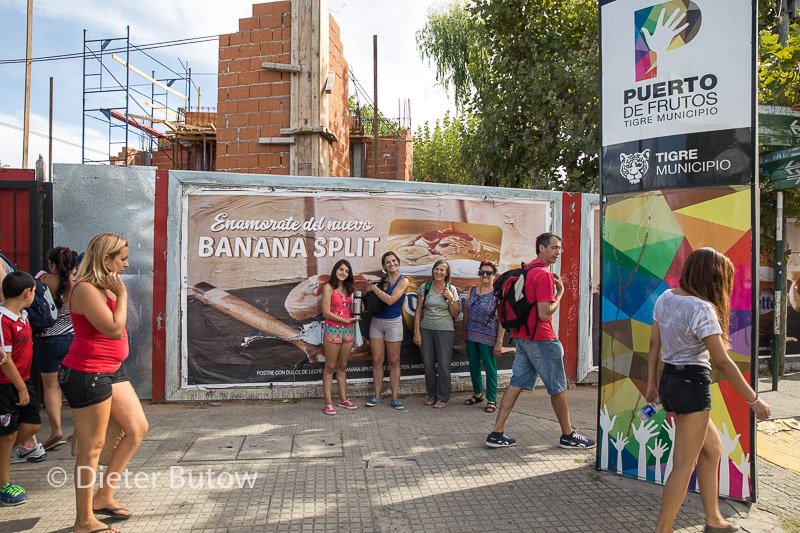 At our friend’s home we held a competition – Asado vs Braai – on different nights. Argentinians normally like their meat well-well done, but with our style of braai, doing a fillet whole, our friends got a good idea that a barbeque could also be done differently. The cook-off made two very pleasant evenings supplemented with excellent local red wine.

As a farewell gift we were presented with a Maté set they had secretely bought in El Tigre – maybe we shall still aquire a taste for it.

Footnote: Should you ever get to Florencio Varela – visit “Via Consenza” ice cream parlour – ice cream at its best.

Finally we had to depart – we could not stay longer than 3 days. The route took us past Moreno to Lujan, known for the annual pilgrimage of about 3 million people. 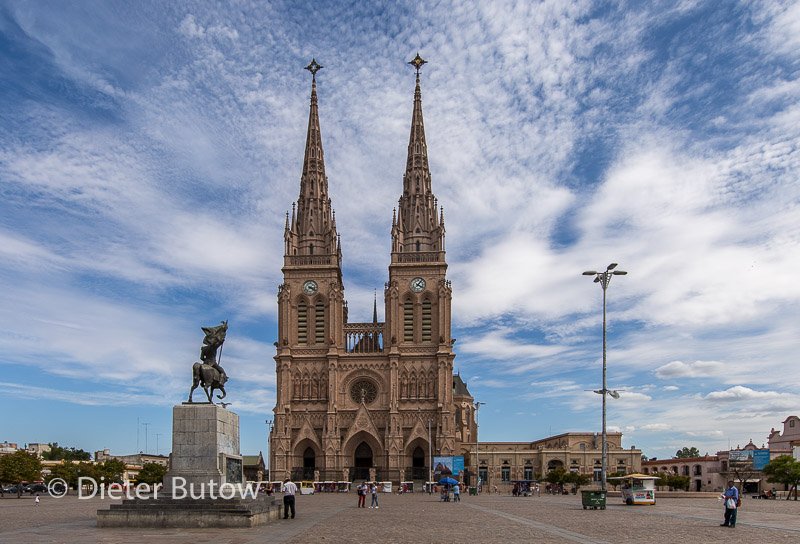 The Cathedral Nuestra Señora is beautiful and we stayed for the night at ACA Camping Lujan.

Then we reached San Antonio de Areco, a gaucho town in many ways, handicrafts and leather can be bought and we paid a visit to the gaucho museum , Museo Gauchesco Ricardo Güirales, an author who is known for the book Don Segundo Sombra, published in 1926.

Various gaucho artefacts are displayed in the museum which used to be a hazienda on the outskirts of town. 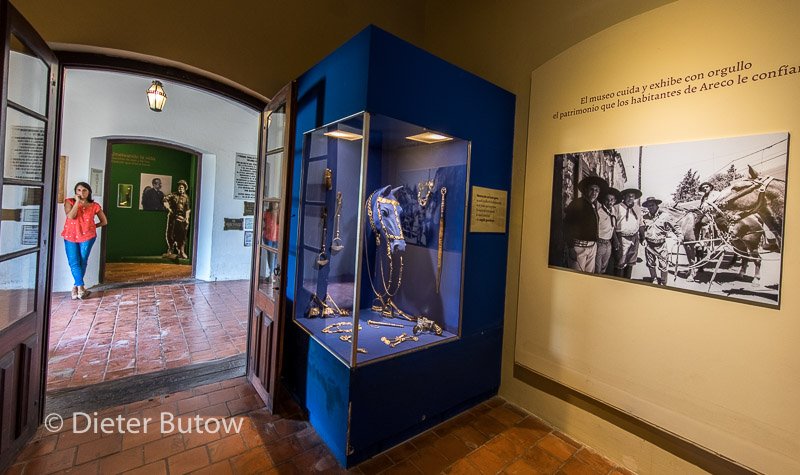 For the night we camped along the Rio Areco on Camping San Antonio de Areco of the  Club Atletico River Plate. The camping was expensive at Peso 540 and did not include usage of the swimming pool – that would have been an extra P100. Later that evening we had to move our vehicle to avoid the party noise of a group that settled in close to us.

After a relaxed breakfast on the edge of the river we continued via Solis to Zarate, dominated by a very high bridge over the Rio Paraná de los Palmas, allowing large ocean-going ships to pass inland to the harbor. Further north along the RN12 we crossed the huge Rio Paraná, again via a large bridge and drove through the lush landscape of the delta, then with the RP16 to Gualeguaychu, known by the locals for its carnival in February – again we were about 2 weeks too late. Finally we reached the wide Rio Uruguay with the common border post of the two countries on the other side. Although there was a typo in the customs car papers, nobody took issue and finally we entered Uruguay without undue holdups – our last border crossing before shipping the vehicle back.

Travellers had drawn our attention to Fray Bentos, that has a World Heritage Site being the old abattoir that can be visited.

We camped in Las Cañas nearby, along the river, amongst many trees, before visiting the museum the next day.

The Museo Revolution Industrial was interesting – not only the abattoir part, but all the stages of equipment used during the industrialization. Justus Liebig and a partner established a meat extract factory here in 1865 that supplied armies during the World Wars with meat based products.

Sind 2015 it is an Unesco WHS, products under the brand name Fray Bentos are still being produced, albeit in North America. Many million cattle and sheep were slaughtered here at a rate of about 400 per hour. 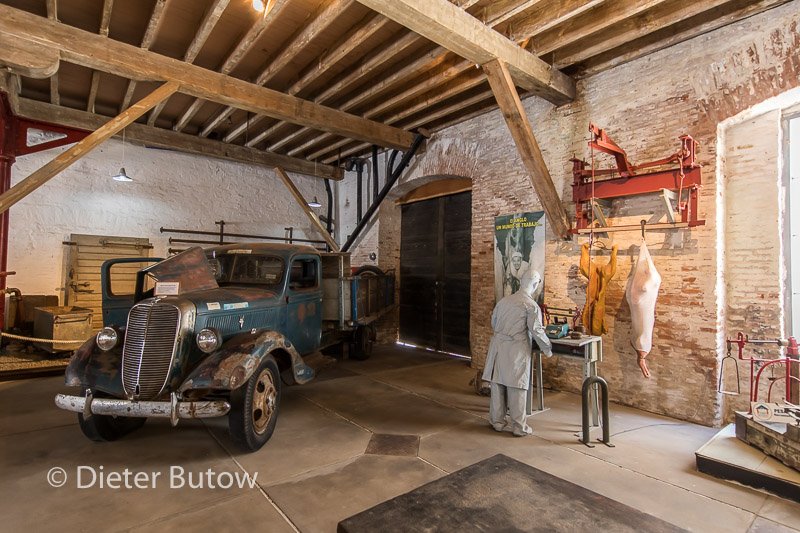 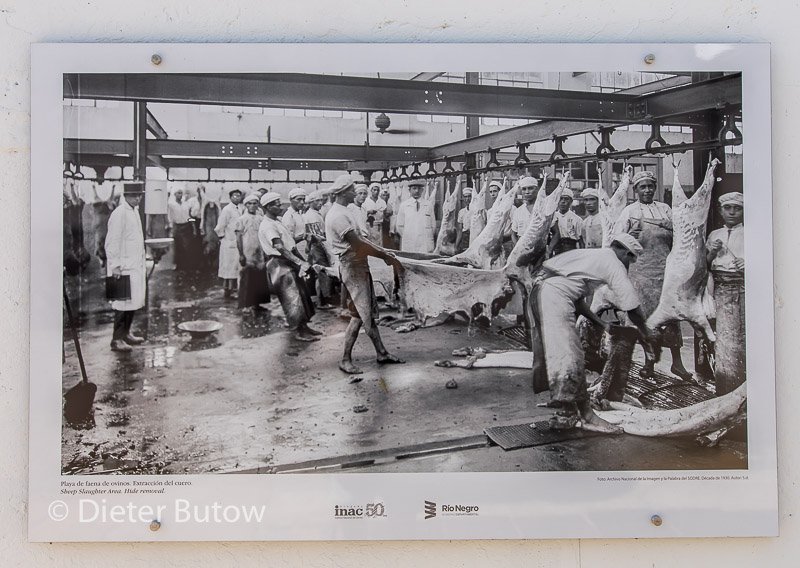 From here we proceeded to Mercedes, soya fields left and right, somewhat monotonous.

At Playa Agraciada we camped for the last night, a large camping site under trees on the Rio Uruguay, hoping for a quiet night. As so often, our neighbours sat up until the early hours of the morning chatting away merrily.

On our way in we stopped on top of Cerro Montevideo and enjoyed the sight of the city from the higher vantage point of 132m. Then we took the rambla along the sea and headed out to Punta Ballena in the direction of Punta del Este, where we were again welcomed by our friends Jürgen and Gisa Hecker, who live there. As before, we spent a number of relaxed days with them and slowly wound down from the last 7 months traveling in the southern region of the continent. In this area the ocean was warm and much clearer, we explored the area and enjoyed daily beach walks. In between we cleaned everything and started preparations for the shipment of the vehicle back to South Africa.

It was here that we had to start looking for an alternative agent, as we found that the price was increasing every time we received an updated quotation from our Cape Town agents. Whereas a year before we had been quoted R59k, the last quotation reached a staggering R81k whereas our currency value had improved. We had a year earlier heard of Eduardo Kessler in Montevideo, an agent that shippers from Europe had used with good success.

We got a quotation from him and it was a lot more competitive. With this information we spoke to our original agents and came to a more acceptable arrangement – in place of paying the transaction via the Cape Town agent, we negotiated with Repmar in Montevideo directly and paid in USD on the spot. This reduced our shipping cost down to a more acceptable R63k, in line with the original quotation. We stayed with the original agent as we did not want to complicate matters on arrival in Cape Town – a decision we did not regret, as the vehicle was cleared without hassles on the carnet we had taken out originally and which we had extended annually.

Eduardo Kessler works together with a company in Somerset West and could also be a good alternative when shipping to Montevideo and back.

Take note that a vehicle does not have to shipped as hazardous goods, provided the tank is below a quarter – better even, near empty. This will save you USD400  per trip. Ours was declared hazardous on the outbound journey and we had to pay this additional amount – but not so on the return journey.

After 7 days of quality time with Jürgen and Gisa we moved on to the Namibian farmer friends near Atlantida, Burkhardt and Anke Schleicher. Here again we had a good time – this time round staying in the container home that Burkhardt had rigged up. Here we finalised the vehicle for containerisation and Burkhardt kindly drove us to the depot José Christofalo on Camino Tomkinson 2912 where the vehicle was loaded and securely strapped, supervised by the owner Eduardo himself and ably assisted by our Repmar agent Laura Saravia. Due to a strike action at the harbour we could not finalise the paperwork and another trip to the city was required.

Next morning we drove to the harbour early – but nothing moved as both container terminals were closed due to excessive winds – nothing could be loaded until 16:00 in the afternoon. While waiting inside the ferry building we suddenly had a hive of activity, high number of police, camera crews, dogs etc. After two hours we heard that it was a simulated drug bust.

We strolled back into the city for a delicious lunch of Corvina fish at El Mercat, the restaurant we had so much enjoyed on our first days in Montevideo 2 years before.

Befitting for our departure we spotted the star for Nelson Mandela – celebrating his 100th birthday this year. 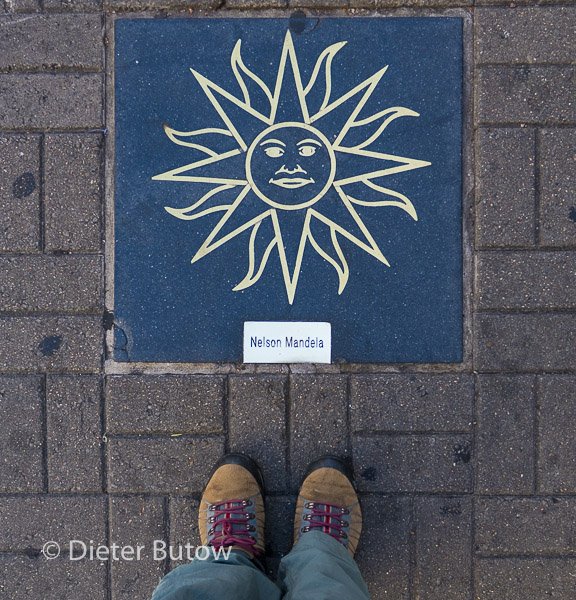 It is a pity that our Nation’s rainbow is currently not shining as bright as it did during his time, but fortunately changes may be on their way.

At 17:00 finally we got everything signed off, the customs officials opened the container doors, took a look and closed it again – that was it.

In the interim Uwe and Almut, our friends with whom we had started the journey almost 2 years before, had arrived and got their vehicle ready for their final 3-month leg going to Cartagena in Colombia from where they intended shipping their vehicle back to Cape Town.

Finally we left the South American continent behind flying out via Sao Paolo, then Johannesburg to Cape Town.

This concluded our journey which will stay in our memories for many years to come.