We were ready to explore the next country: Chile. Although Peru has been a wonderful country to visit, the amount of rubbish everywhere started working on us and we had heard Chile to be quite different. As we started along the Pan Americana we realised that this country was organised and clean -what a pleasure. What surprised us, however, was the sheer size of the Atacama desert.

From Arica we started right in the north of Chile along Ruta 5. Soon we reached three modern petroglyphs, the “Presencias Tutelares”, representing  Aymara beliefs and were created by the Chilean artist Juan Díaz Fleming, honouring the ancestors of this region. 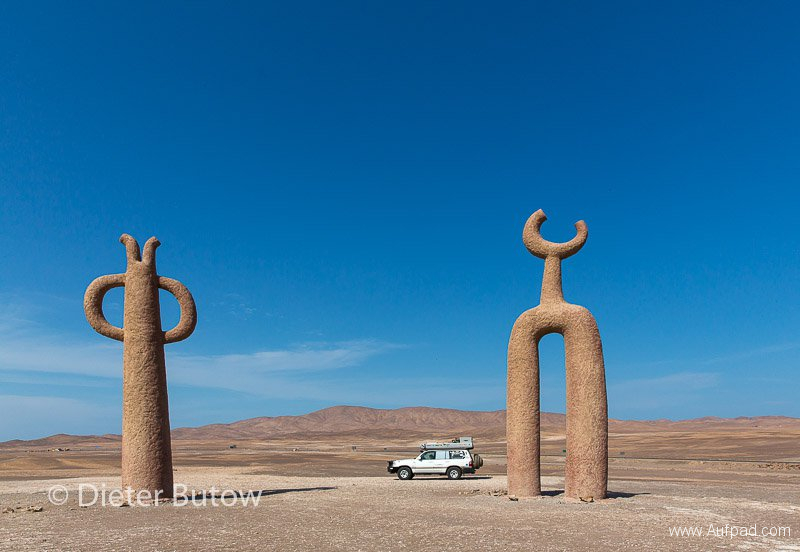 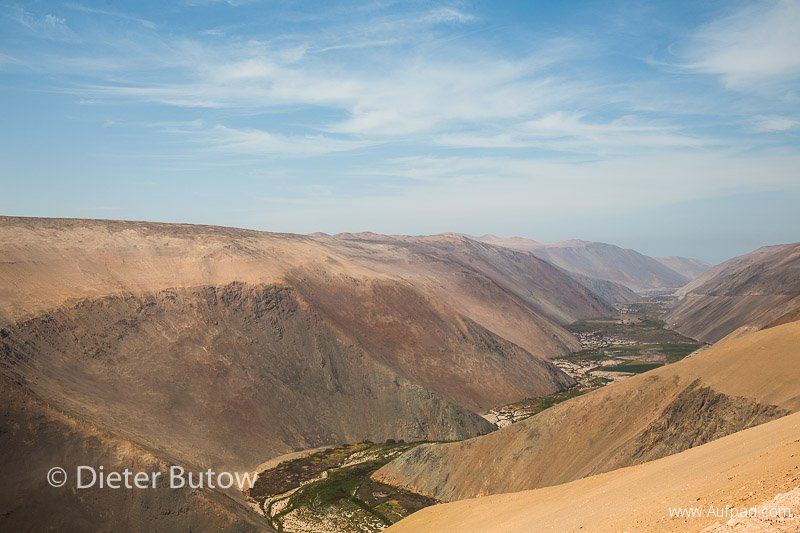 Just off the Pan Americana we took a track to the west until we saw the Geoglifos de  Tiliviche –large stone figurines, on the side of a hill, of a Llama herd and their shepherd trekking. 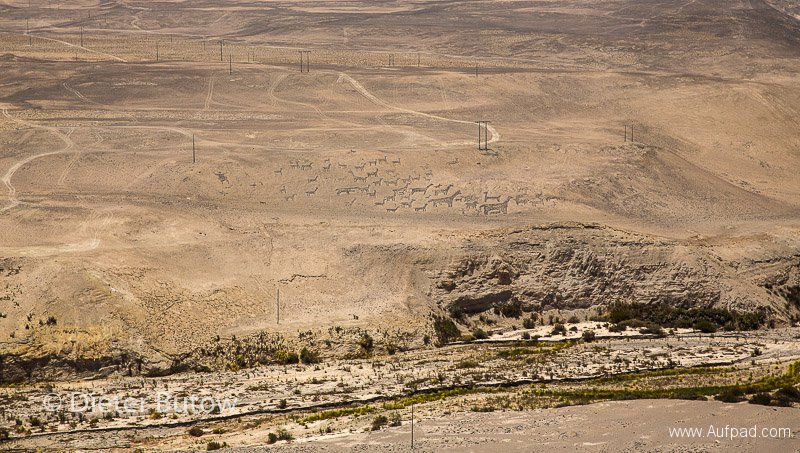 Next was El Gigante de Atacama – the largest geoglyph of 85m on top of a hill – pretty disappointing as it was not visible as a complete figure, maybe more exciting to view from the air or using a drone. The wind picked up and we had a sandstorm and plenty dust devils. 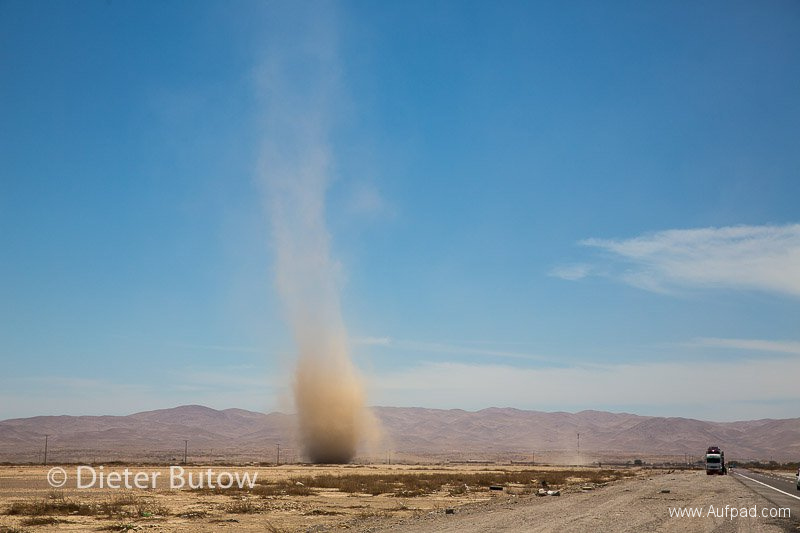 Next we made our way to Oficina Santiago Humberstone – a deserted nitrate mine  (Salitrera) and its processing works that were operational from 1872 to 1960 – today it is kept as a museum that reminded us of Kolmanskuppe in Namibia (deserted diamond town). The product at the time was both important as a fertilizer as well as for gun powder during the world wars. 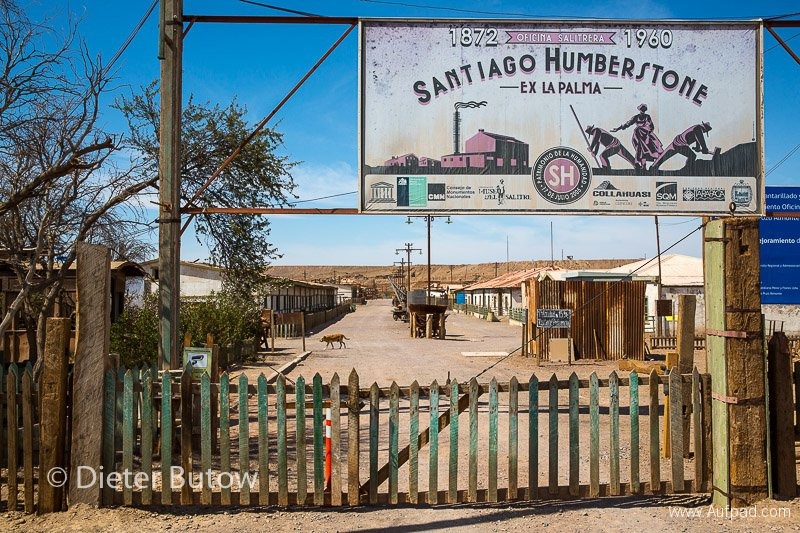 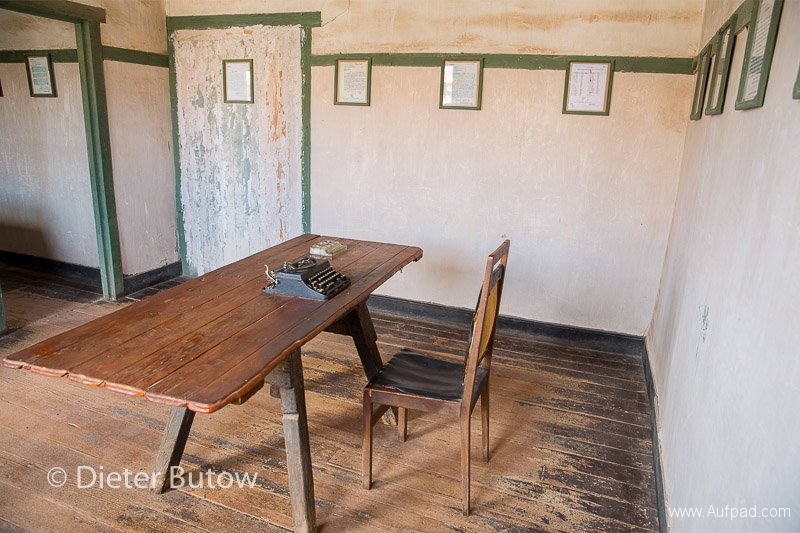 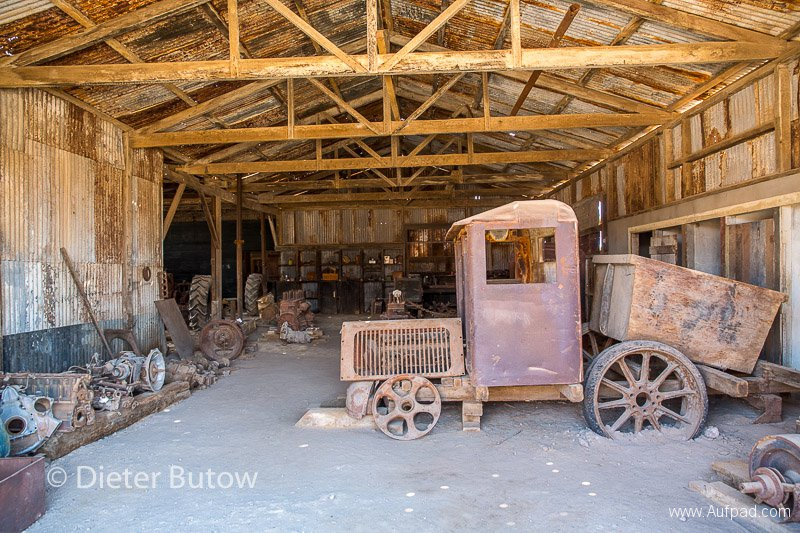 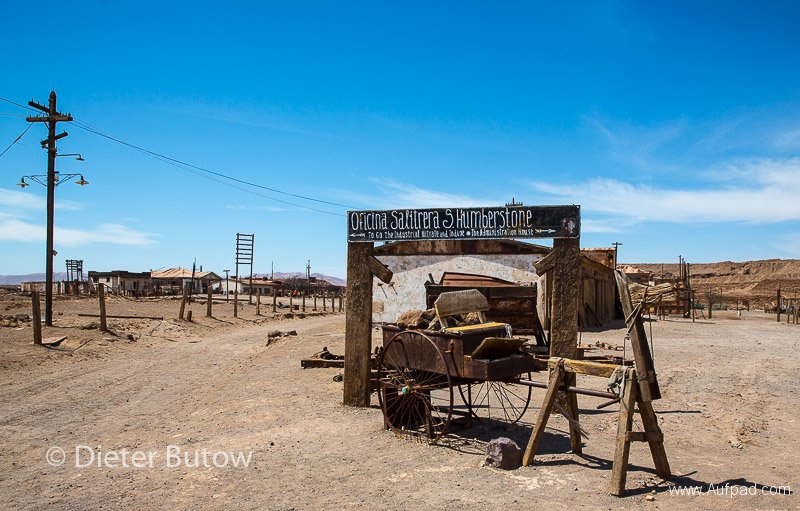 The city of Iquique was situated against a massive dune and we camped on the camping site & cabañas outside the city, named Tres Islas and run by owner Thomas. 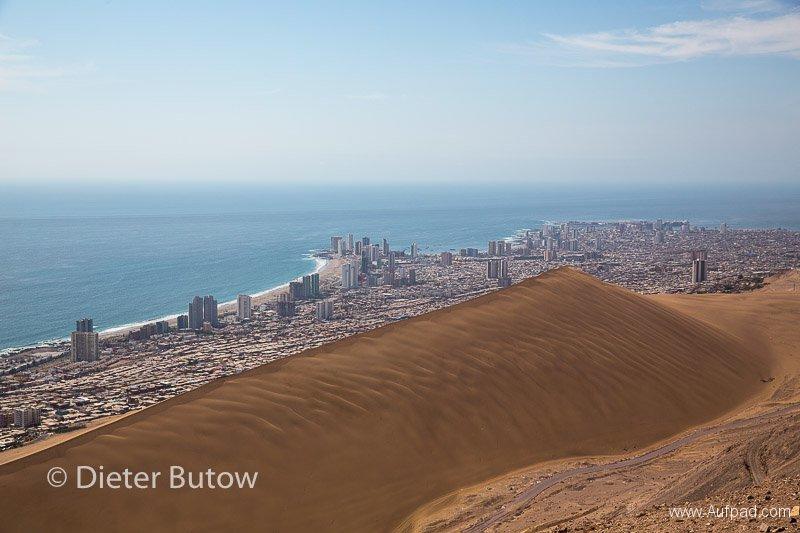 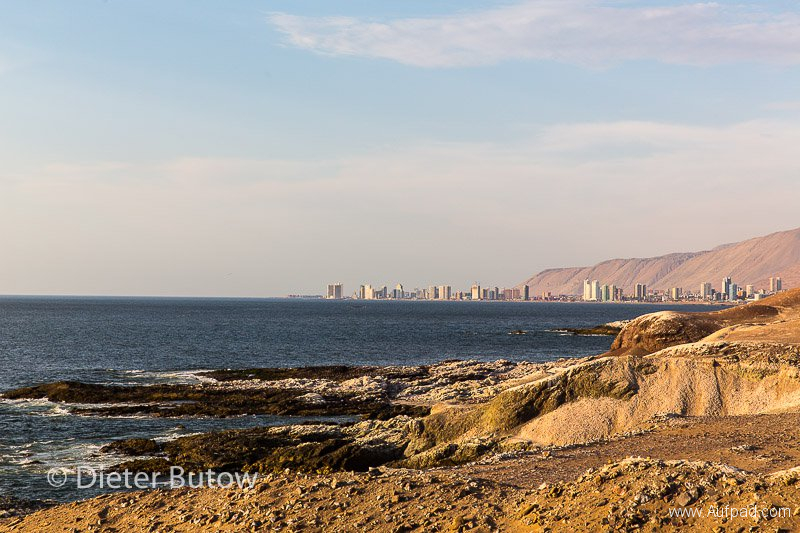 We decided to stay for New Year after meeting new travel friends Laima and Mindaugas from Latvia, as well as Otto and Elisabeth from Germany and Maria and Heinz from Switzerland. 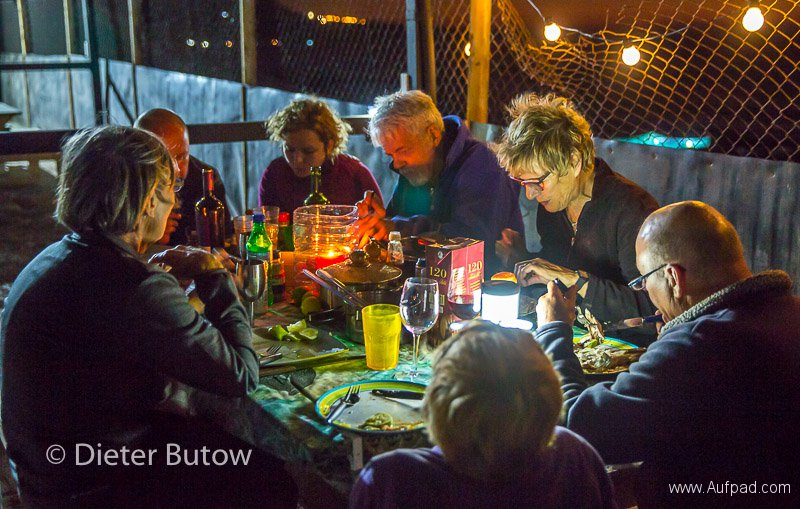 Together we spent the day in Iquique, visited the old part of the city (it used to be a major harbour for nitrate exports, now it is the biggest producer of fishmeal), then visited the fish market where we bought fresh Reinata for the evening grill and later enjoyed a massive and splendid fireworks display over the city at midnight. 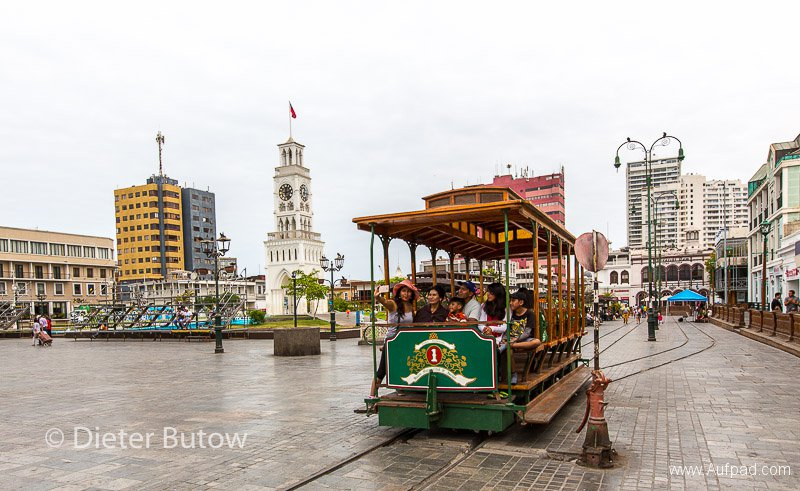 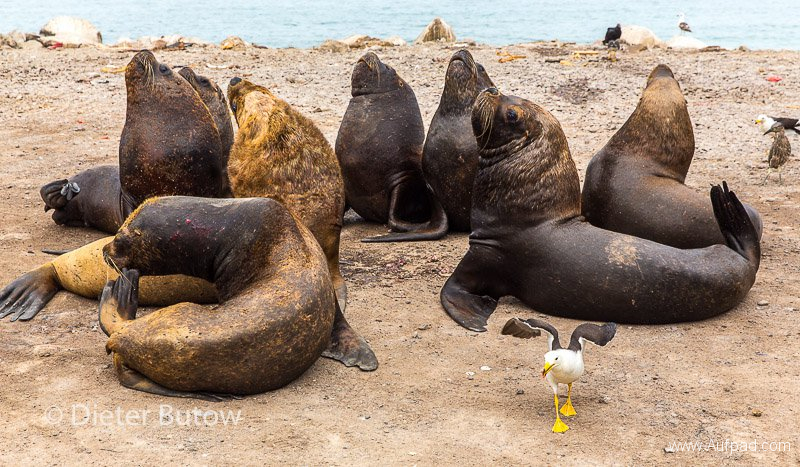 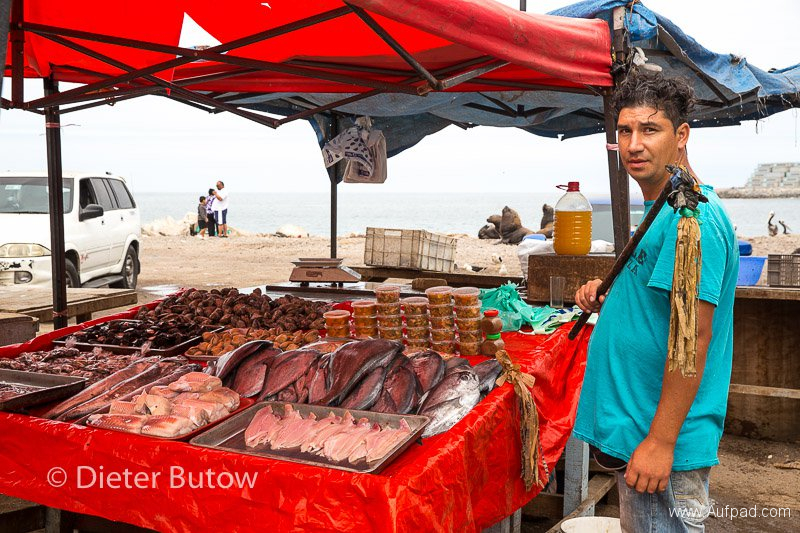 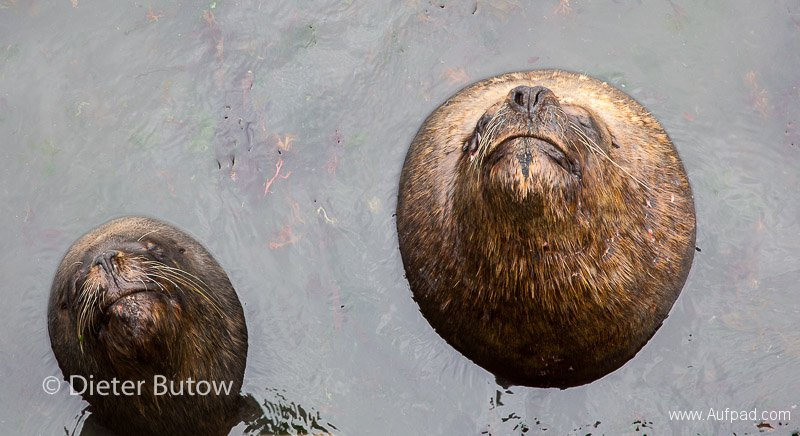 After New Year we carried on along the coast on Ruta 1, on the left we had the Cordillera de la Costa, then drove inland on the Ruta 24 up to Calama. This time of year many people camp wild along the barren coast of Chile. 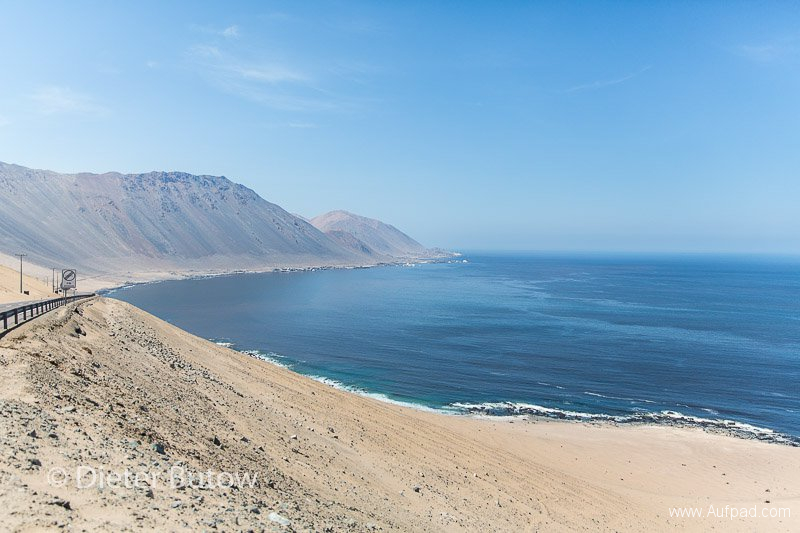 Before we reached San Pedro de Atacama we turned off to have a look at the Yerbes Buenas petroglyphs depicting mainly Llamas. 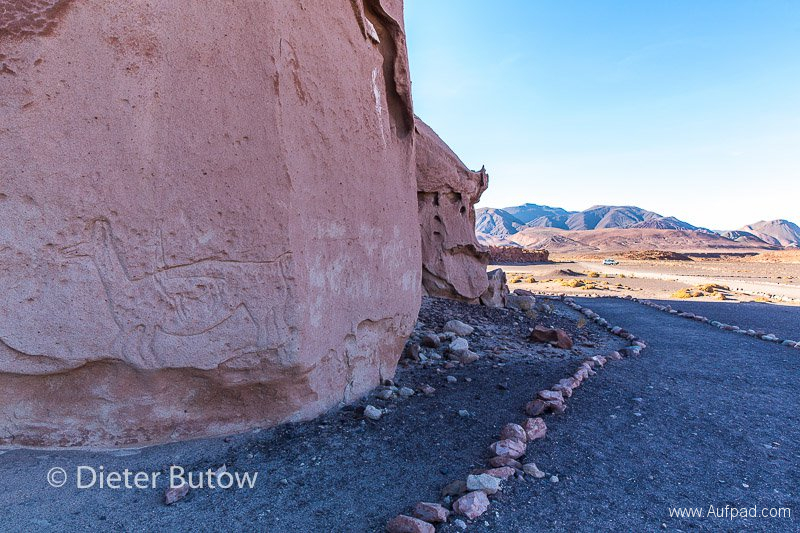 Then we drove further into the Valle de Arcoiris – valley of the rainbow mountains. Very prominent and colourful mountains and sandstone formations, we wild camped far in and had one of the quietest nights on our trip so far. Cold and clear skies during the night with with a wonderful and soft light dawn awakening us. 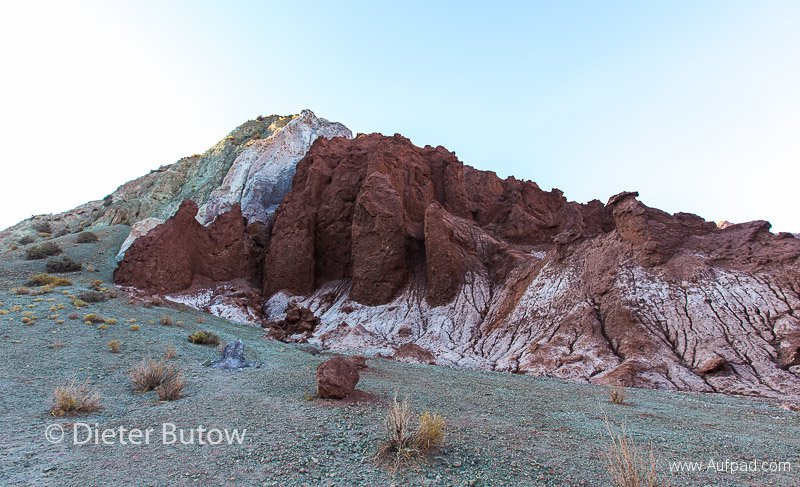 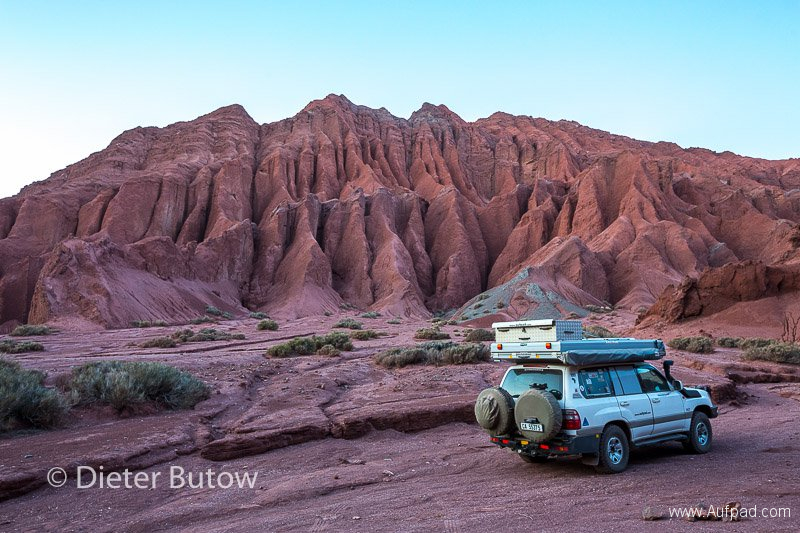 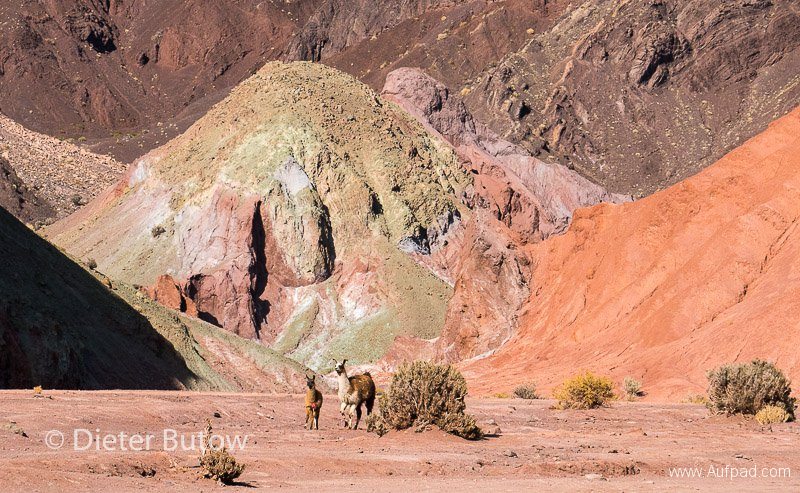 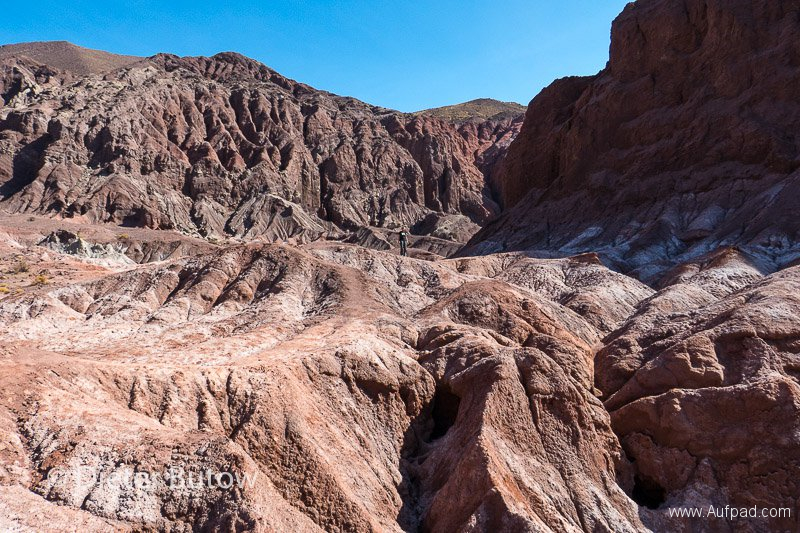 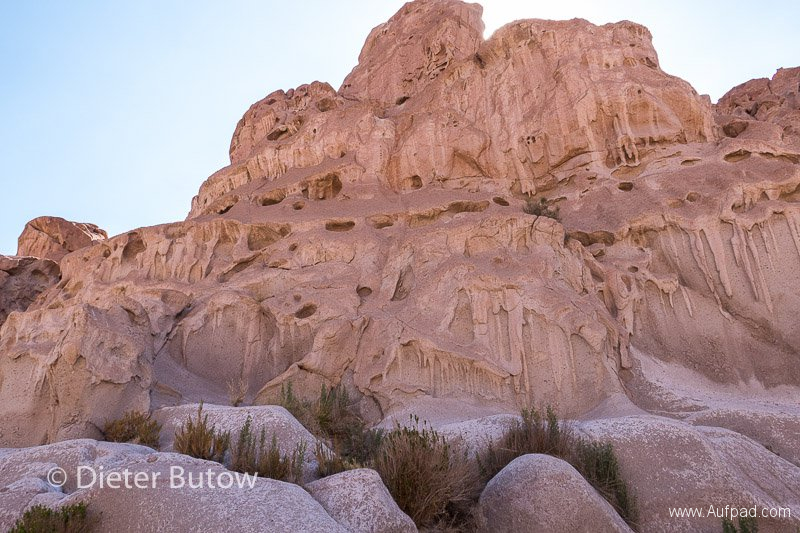 Mid morning we carried on to the viewpoint above the death valley “Valle de Muerte” with a wide view over the valley and the dunes frequented by sand boarders. 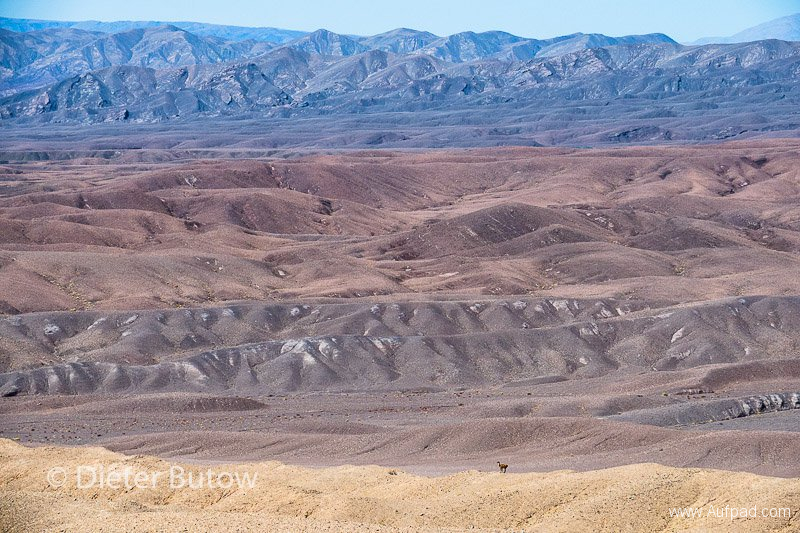 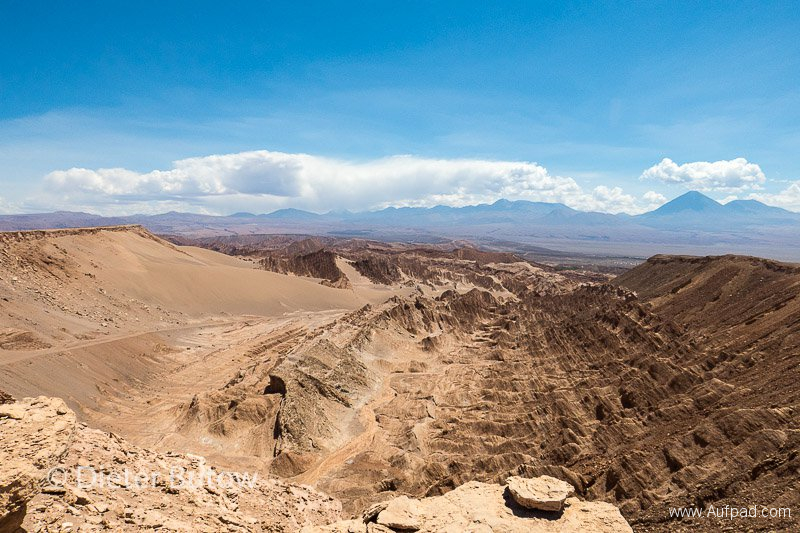 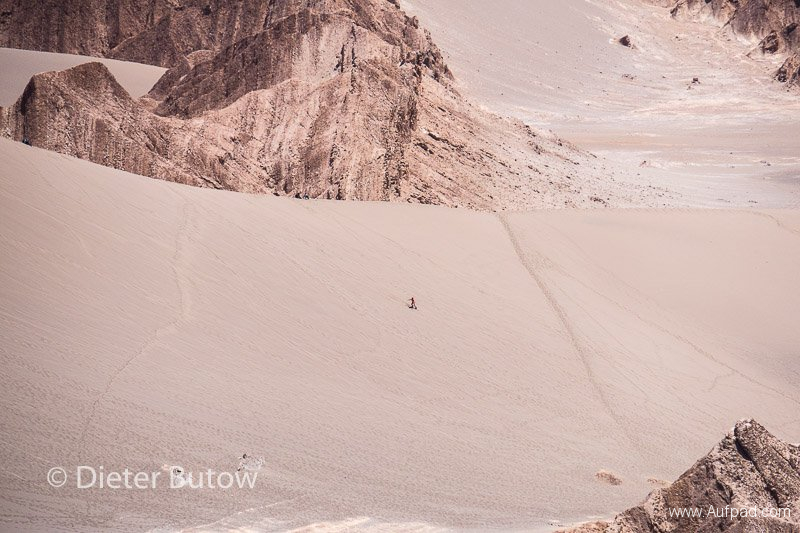 Then on to the Valle de Luna, where we climbed through the salt caves and visited the very old salt formation “Tres Marias” (one has unfortunately toppled over) and made our way into the nearby salt mine with its eerie crackling sound of the salt as the day heated up. 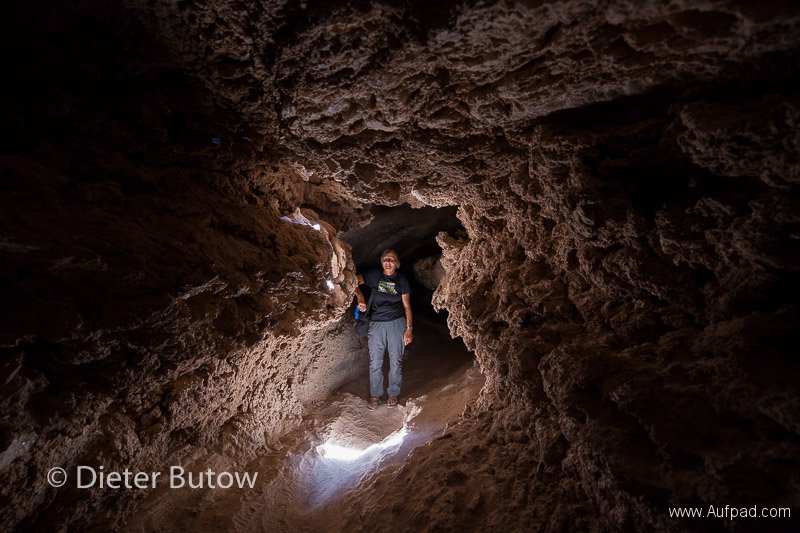 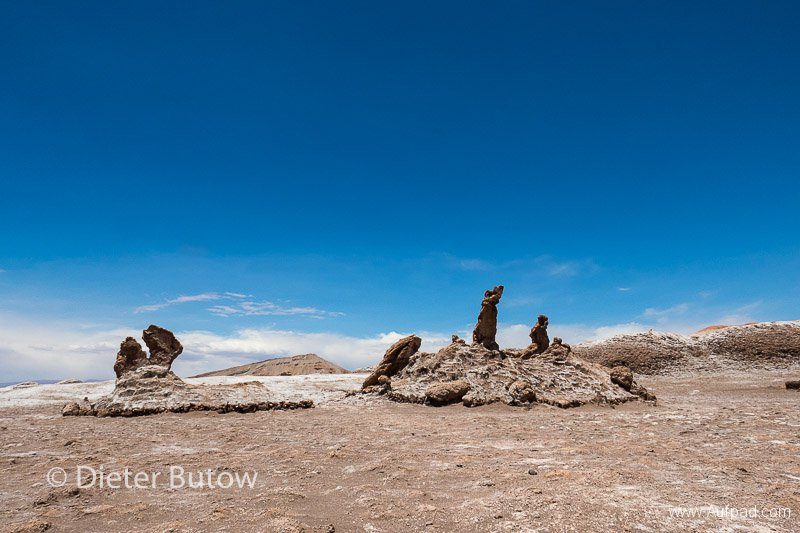 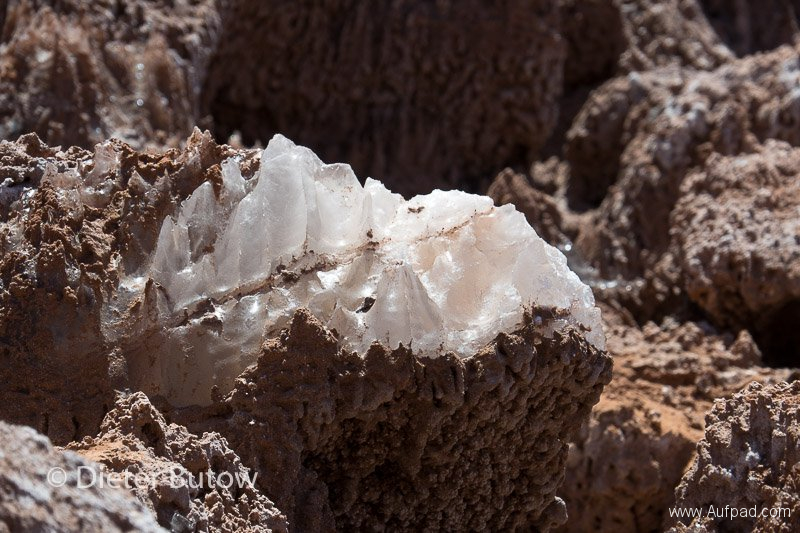 On our way back in the excessive midday heat we came across two cyclists ( Benjamin and Louisa) that were just too happy to top up their water bottles from our tank in order to get back to San Pedro in the day’s excessive heat. The view from the surrounding hills was stunning and we climbed one of the peaks despite the temperatures – it was worth it. 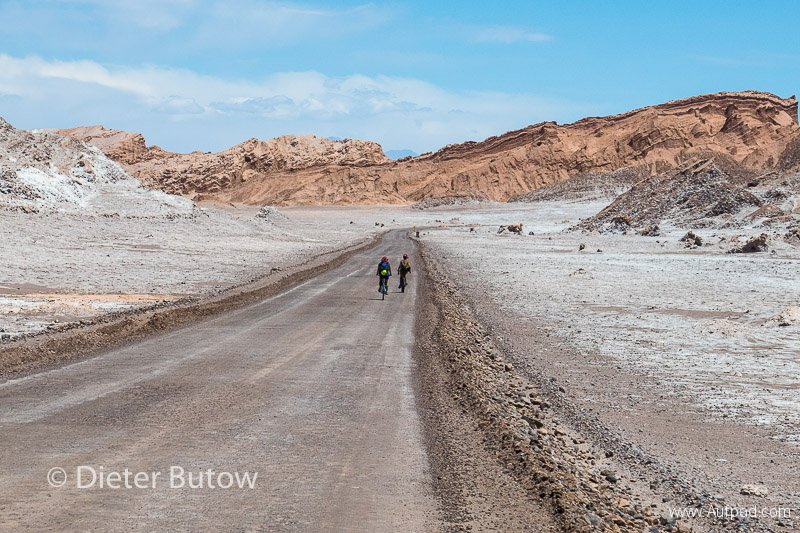 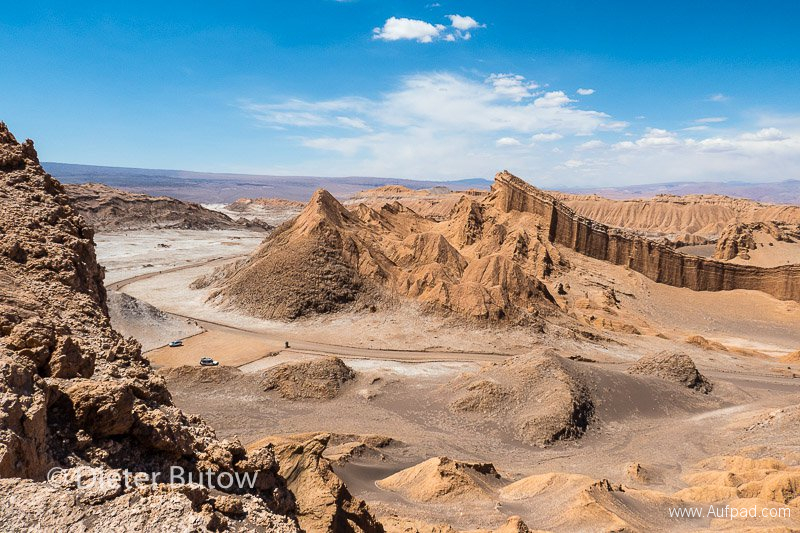 Finally we arrived in San Pedro de Atacama where we found a camping spot at the Hostal de Campestre run by Urzula – not a quiet night as the town had music until 2:30 am and the owner also celebrated his birthday with friends at the hostal.