By now we had two goals: visiting the only colony of King Penguins and reaching Ushuaia for New Year.

As we drove southward the wind increased and it grew colder by the minute, light rain set in that sounded like hail hitting the vehicle. Around us nothing……really nothing. Flat country-side for miles on end, no trees, no hills, no estancias. We started wondering whether tonight would be the night where we had to sleep inside the vehicle without opening the rooftop tent. 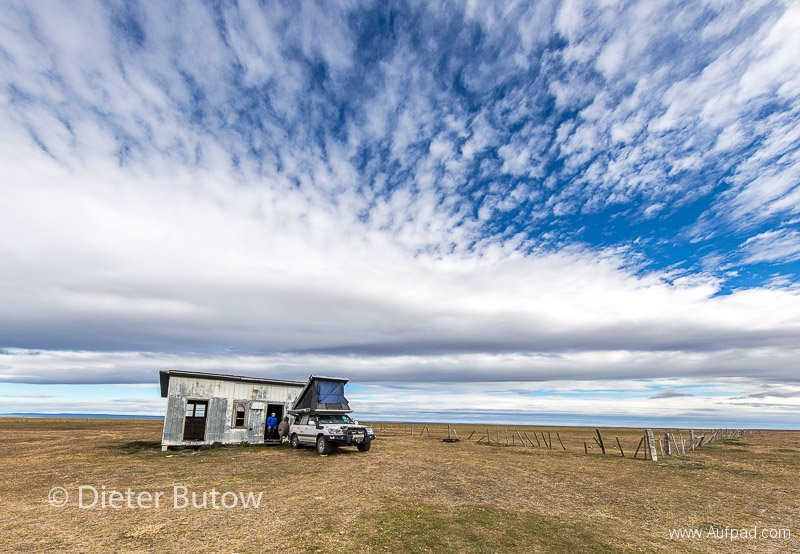 As we deliberated our options, a small hut appeared on the horizon – amazing that it withstood the gale. As we got closer our decision was taken – we shall park next to the shelter on the lee side. Since wind in Patagonia normally blows from the west, the door opened to the east and to the roadside. As we came closer we realized it was not inhabitated – this is a type of shelter for herders passing with their flocks. One room was reasonably intact and still had floor planks -the other must have been used as firewood. 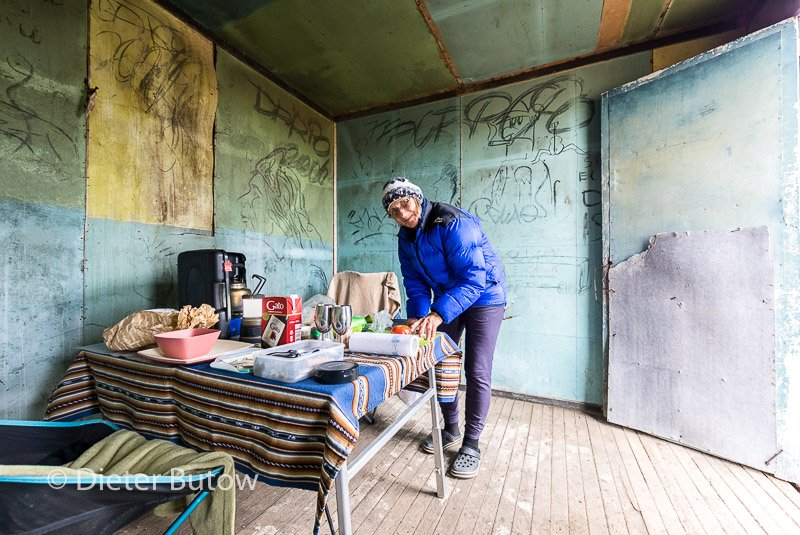 The stench was barely bearable – a herder with his flock and dogs must have stayed here for a while. Judging by the graffiti on the walls the herders must be lonesome and longing for their loved ones. We moved in, happy to have found a little niche in this nothingness. After a supper and a tea the world looked much more attractive again. 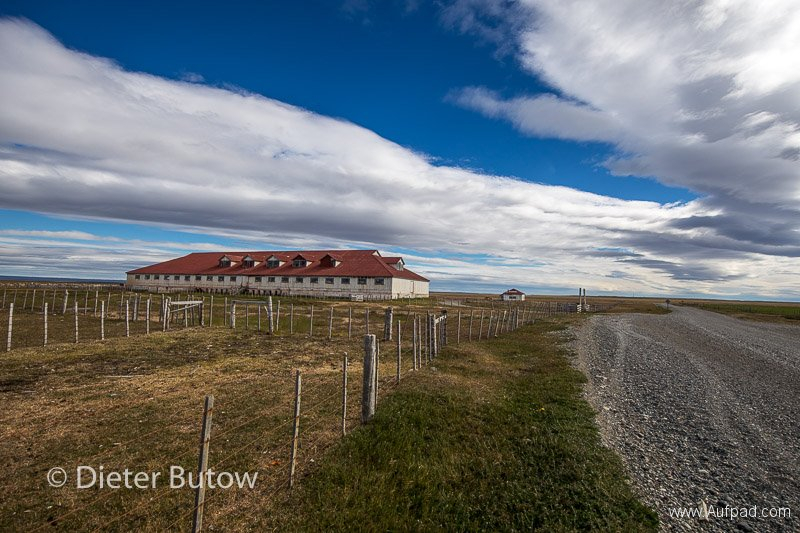 Next morning we were greeted with an overcast sky, the world looked a lot friendlier then and in the distance we could see the large shearing shed and winter quarters for the animals on the estancia. 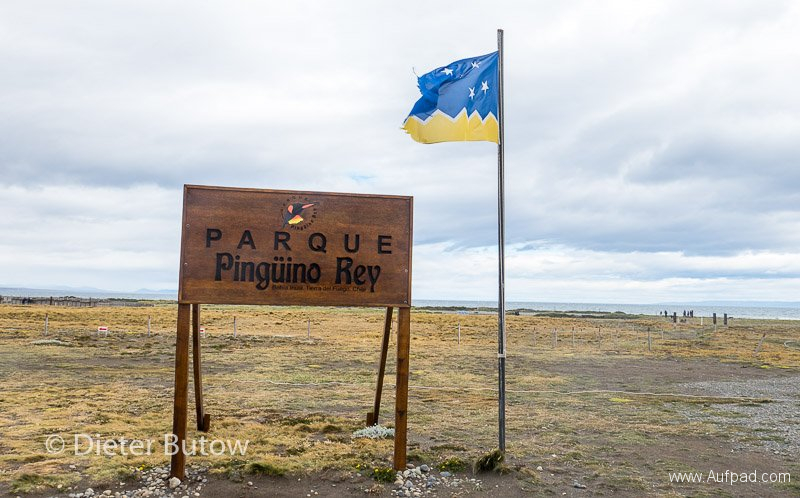 An hour later we reached Parque Pingüino Rey in the Bahia Inútil – too early, it was still closed. However, the local ranger ( very knowledgeable, also having visited Cape Town’s penguins in Boulders Beach as part of a Penguin Conference in the previous year) had mercy with us and allowed us in early at 10:00 to make good use of the prevailing sun which just poked through the clouds for about an hour (the park opens at 11:00). 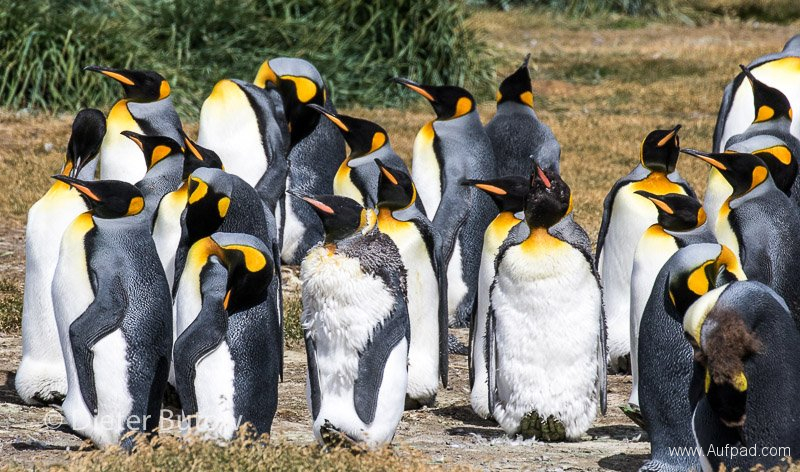 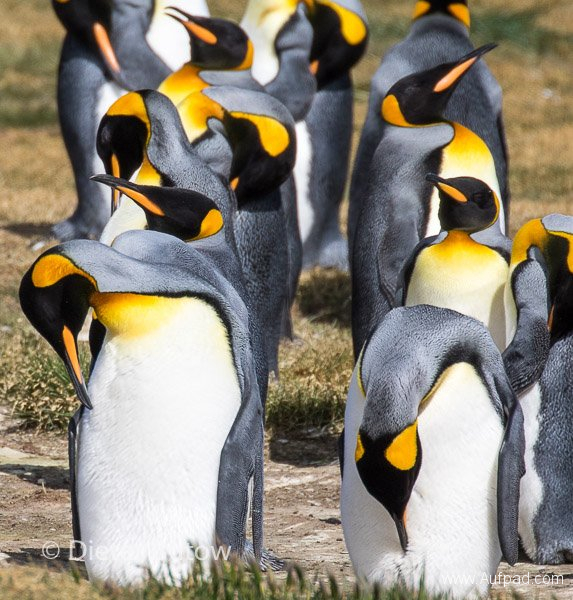 The King Penguins used to breed in substantial numbers along the Magellanic Channel, then disappeared as the fishing depleted the channel. Since about 7 years they have returned and commercial fishing is no longer allowed. Their numbers are slowly increasing again, currently there were about 100 of which are 30 breeding pairs. They also stay here for the entire year as there are sufficient Sardines in Inútil Bay. We considered ourselves lucky being able to see Penguins of all ages here – some still in their infant brown downs, some moulting into adult and some with eggs breeding. King Penguins reach a height of 1,20 meters and age to 25 years. 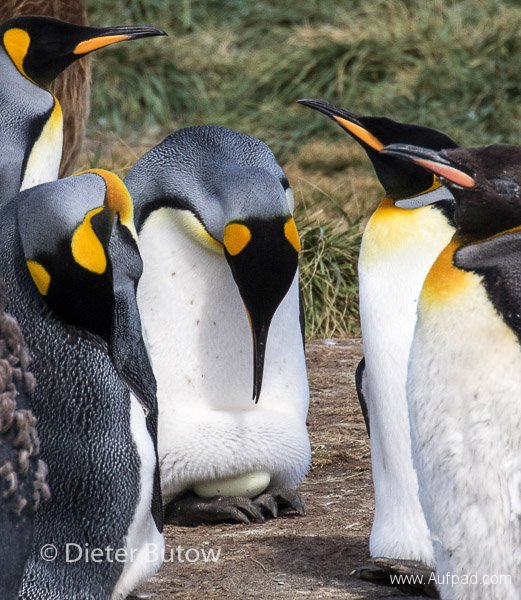 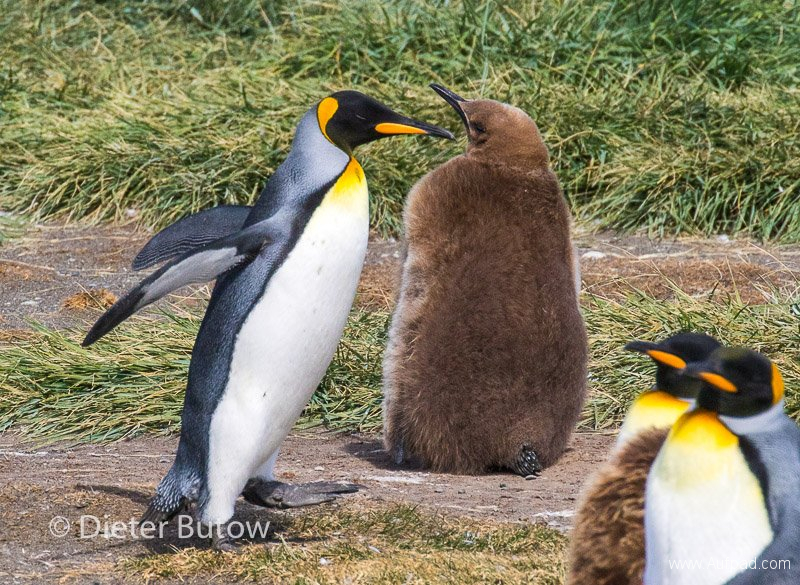 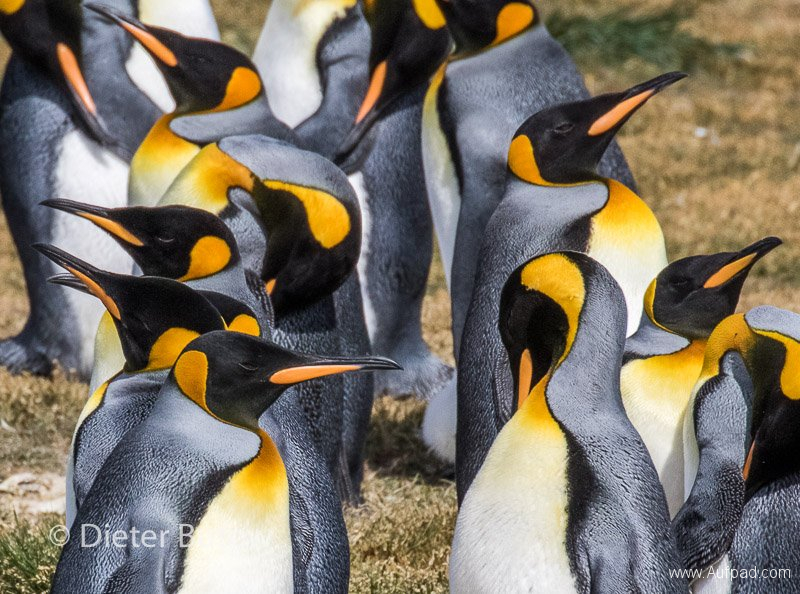 From the park we continued along a good gravel road, a very remote area, drove through the village Cameron with the Communa Zimaukel and observed some ducks along the coast. 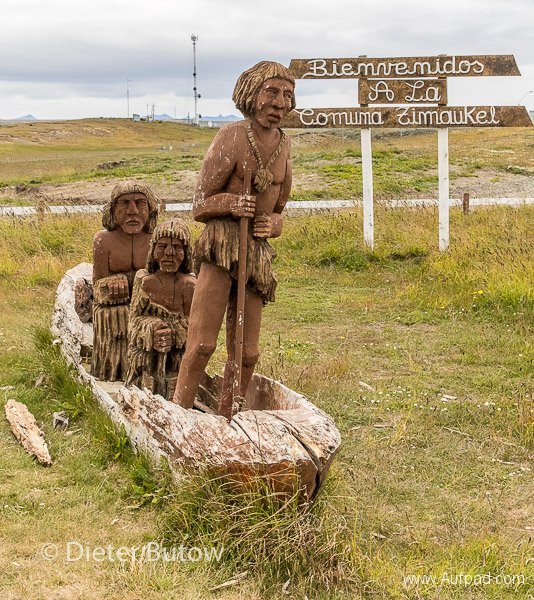 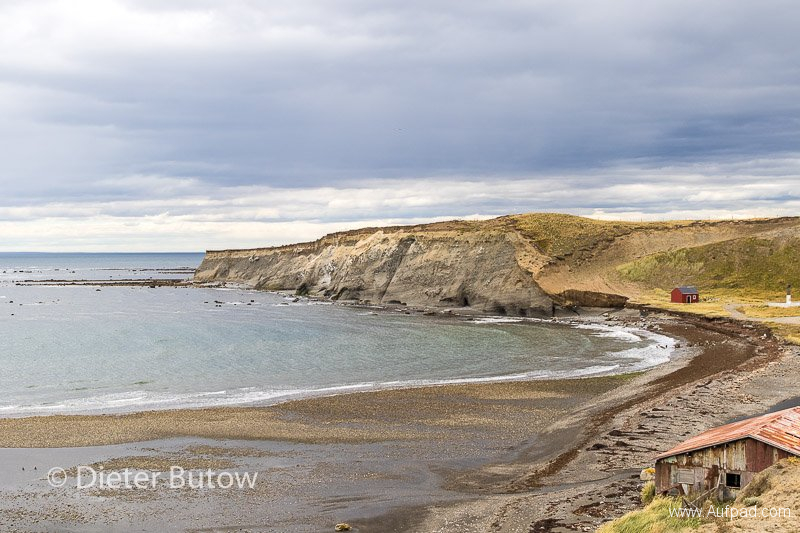 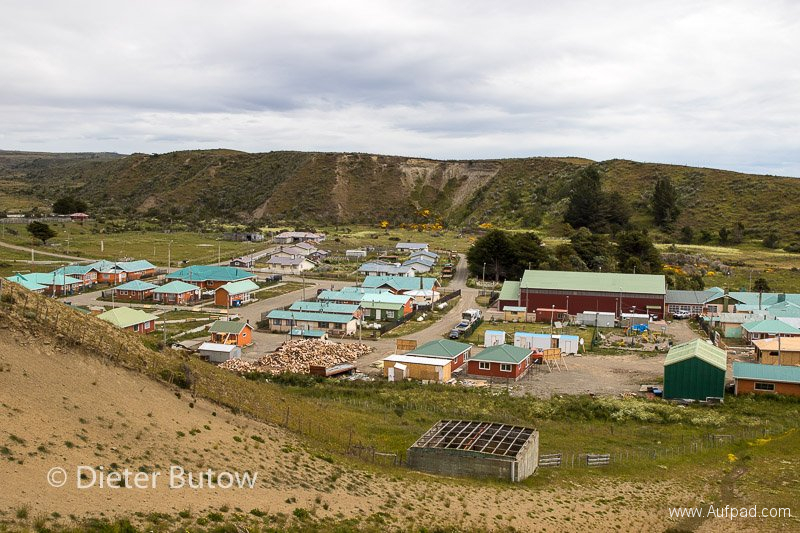 Along the road we saw many trees strangely formed by the constant winds of this region – reminding us of some trees at home in Cape Town that also grow in the direction of the South Easter winds. 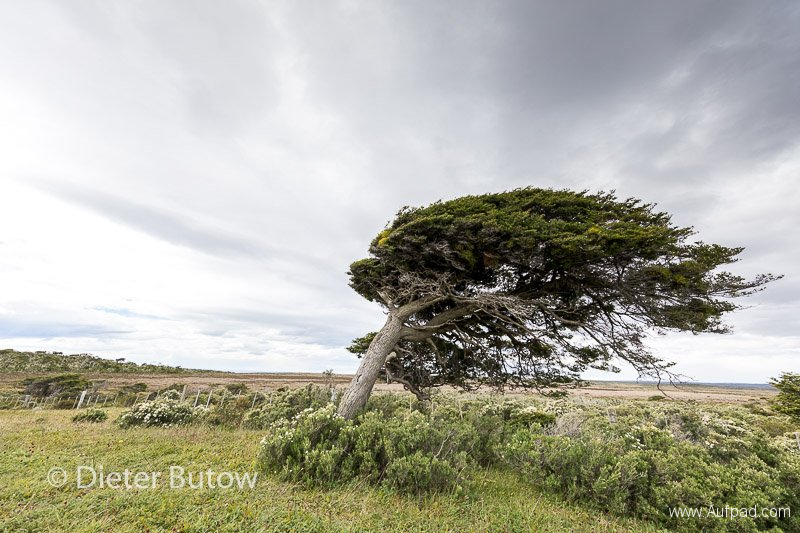 Just before Parador Russfin, as small hospedaje that seemed to have catered for the gold miners many years ago, we left the road and found a clearing in a small forest providing us shelter from the wind for the night and with an idyllic view over the plains. Since we would be passing over the border next day into Argentina, we had to finish all fresh produce – Asparagus with Ham – not a bad meal in this desolate area. 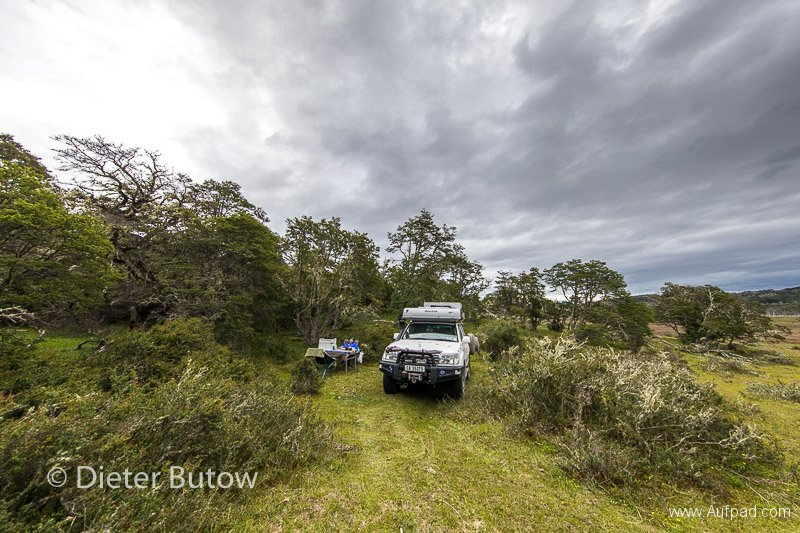 We had done 20000km since we had started in September in Montevideo and we realized, that travelling this part of the continent requires a lot of distance driving, much more so compared to our first 11 month going north in 2016.

The next morning greeted us with drizzle and 8 degr. C , we left early, passing some old gold digger machinery at Dragua Aurifera. Along the Y895 road we spotted four grey foxes ( Zorro gris),  some guanacos with foals (or what is a small camel called?), passed some beautiful old estancias, normally situated in depressions with some wind shelter through small forests. 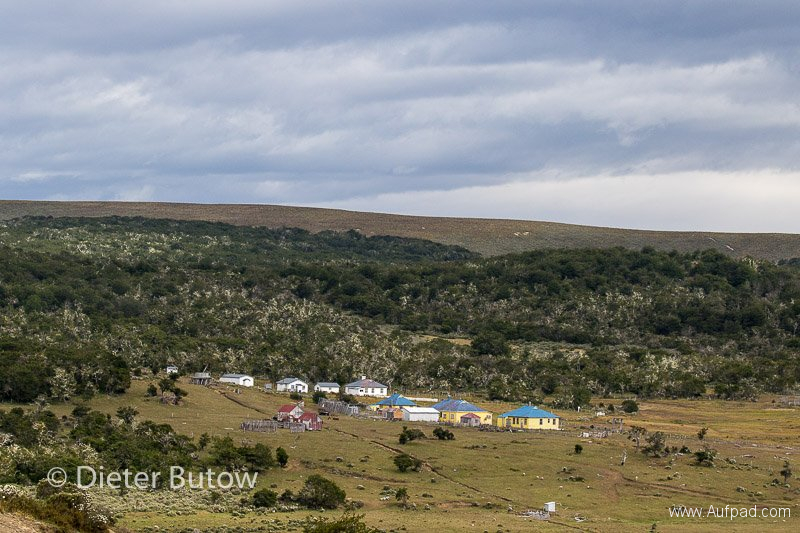 Here we  met a gaucho along the road, who was keen to know where we were coming from and heading to. 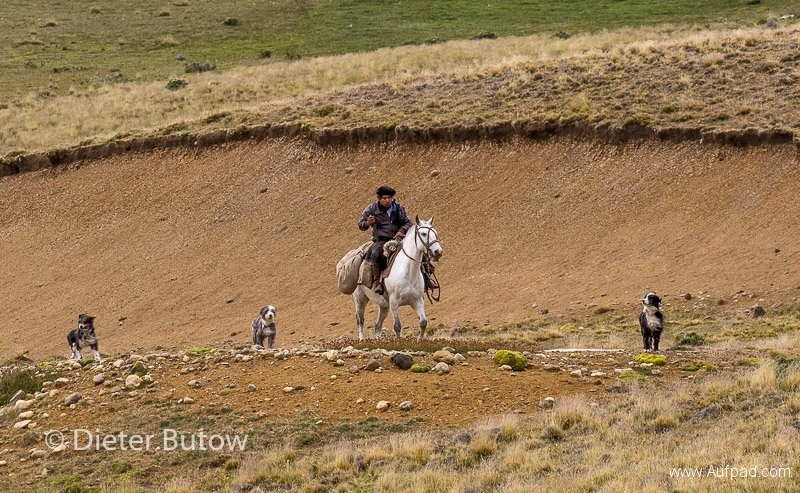 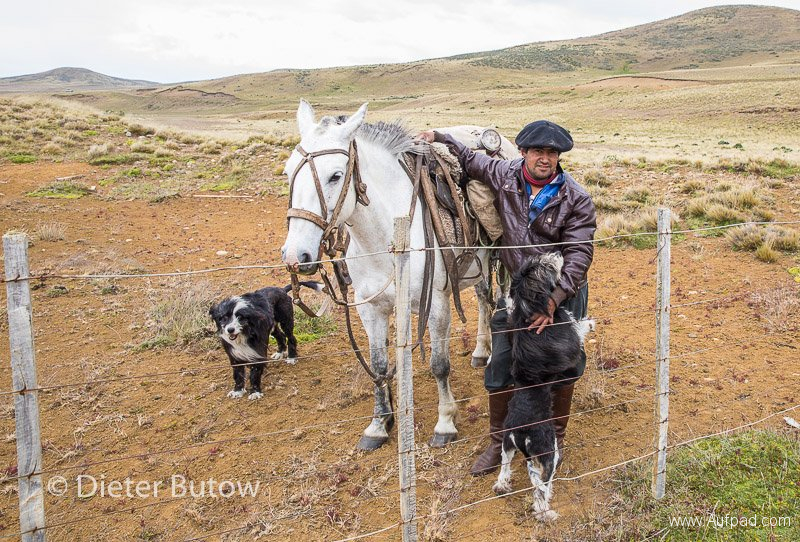 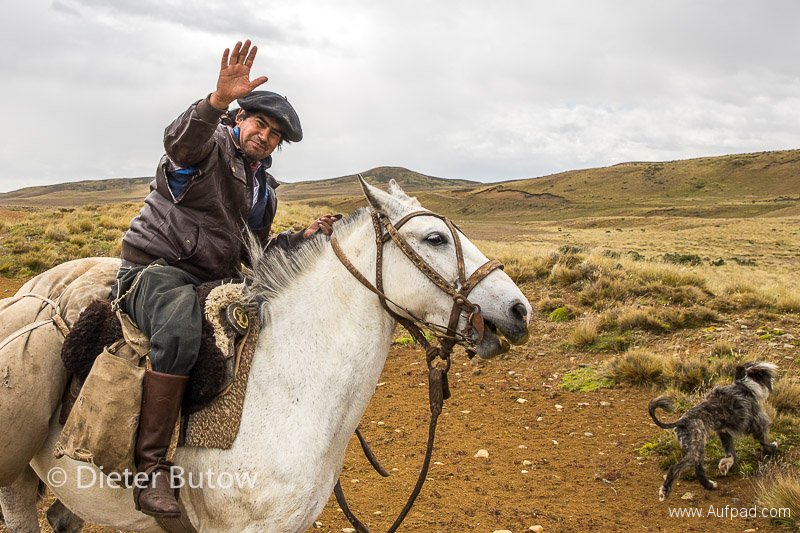 We reached the 257CH again that took us down to San Sebastian, the border town, where we stopped next to the police station (less wind) and prepared a hearty breakfast of eggs, bacon and mushrooms – ensuring that border control does not have a chance to seize it.

Passing the Chilean border here was quick and the Argentinian side is about 15km drive, again no problems and was quick to enter.

Entering another country always means to find a supermarket as soon as possible, in order to stock up again. In Rio Grande we found a La Anonima  – thereafter we proceeded to find our next stop for the night. Little did we know what weird place we would find for the night.