Overlanders touring in South America know that, when crossing the border into Chile, the unexpected can happen. Some vehicles pass easily, others are subjected to a search – mainly for fresh produce. Taking the small border post Bella Vista after a public holiday should  have been quick and easy. It was not. 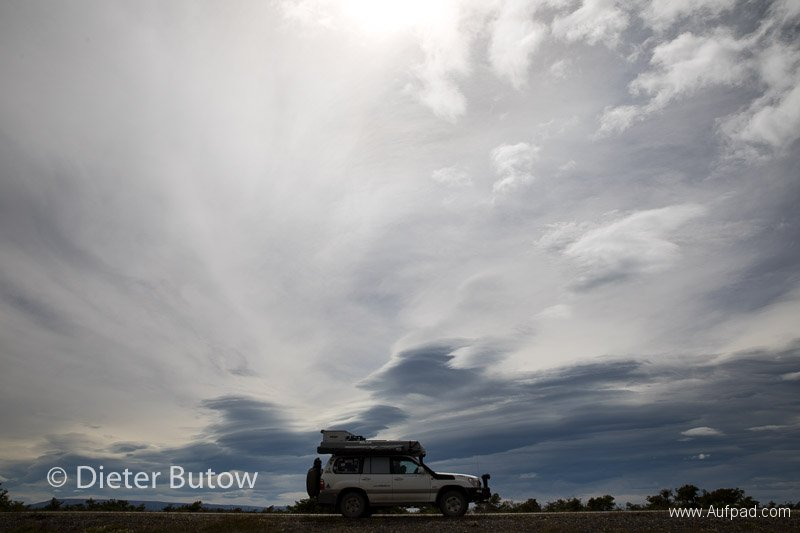 The customs official subjected our vehicle to an extremely thorough search, even after we had voluntarily surrendered half a pineapple that we could not eat, as we were filled to capacity (the fruit was then deposited into an underground rubbish container in our presence). While it started sleeting this good official climbed into the vehicle, searched all over, found eggs in the fridge, which we said were cooked. This was not good enough -he made us open an egg in the vehicle in his presence – luckily it was hard boiled, otherwise we would have had a mess. With him, standing by, was his young son on holiday – we assume dad had to demonstrate to him how good a customs official he really was! 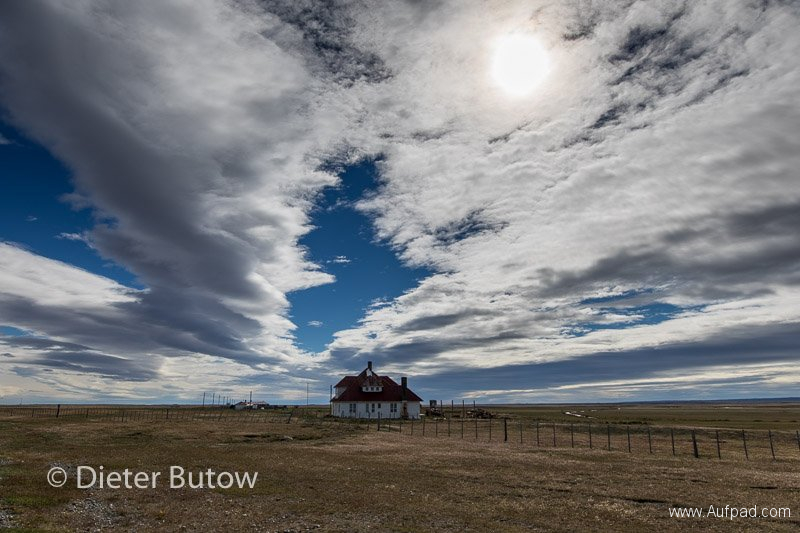 After this short ordeal we proceeded via Russfin passing the derelict machinery from the gold rush, passed Cameron and ended up at our gaucho hut with its graffiti in order to have some shelter from the wind. The batteries disconnected, we spent a quiet, but cold and very windy night after the sun set at 22:30. 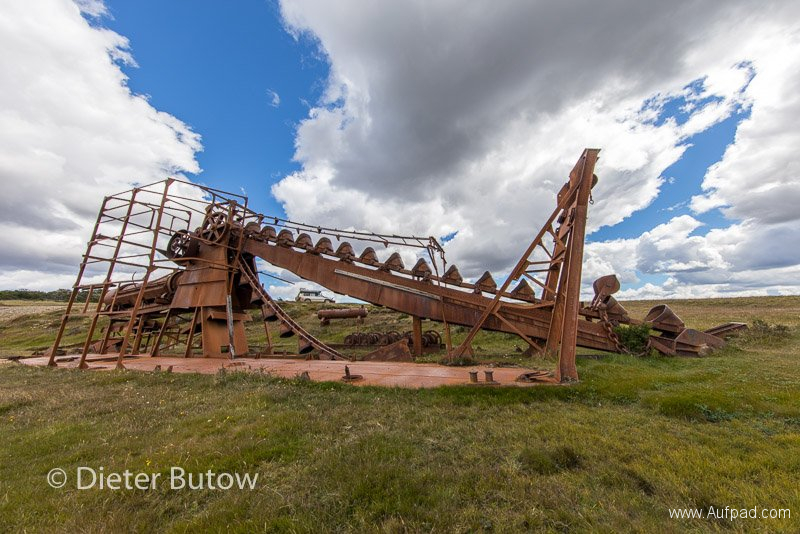 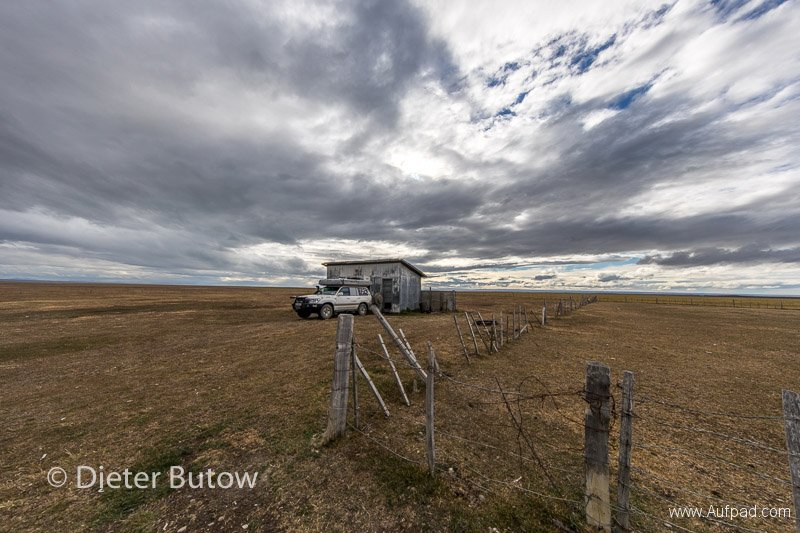 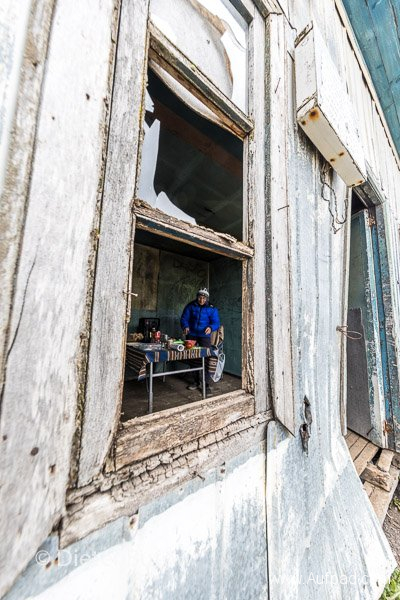 After an early start, a quick breakfast we were ready to go just when the rain set in again. On days like this Karin really appreciated the fact that our cruiser had heated seats – within 15 minutes you felt comfortable and warm while the Tierra del Fuego harsh windswept landscape flew past. 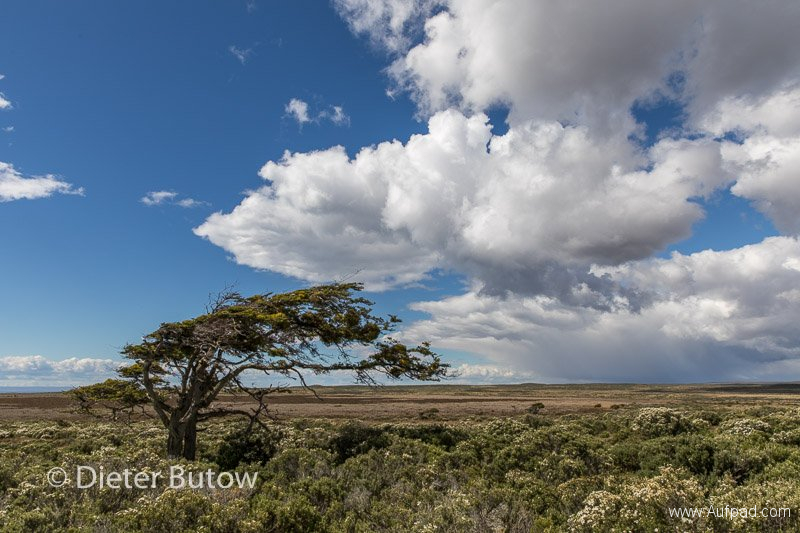 At Bahia Azul we again used the ferry which crosses every 20-30 minutes.

Along the way saw some typical wild horses and the road remained virtually straight. 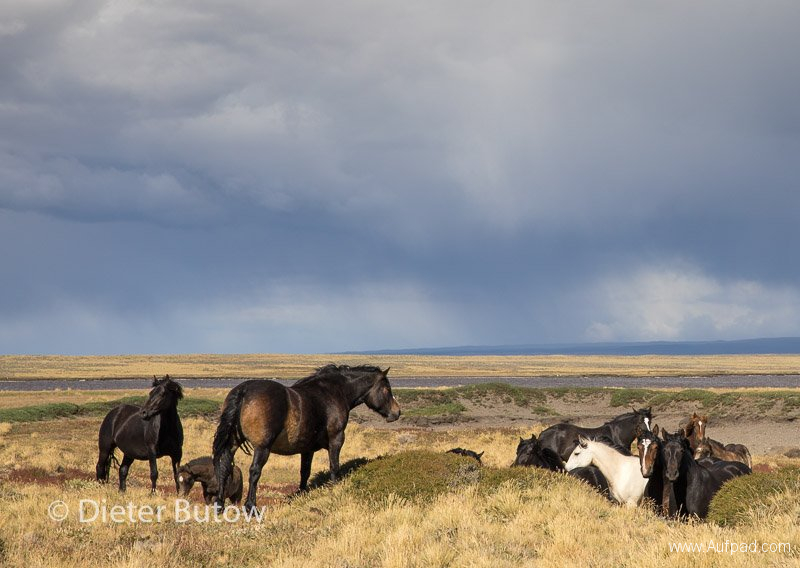 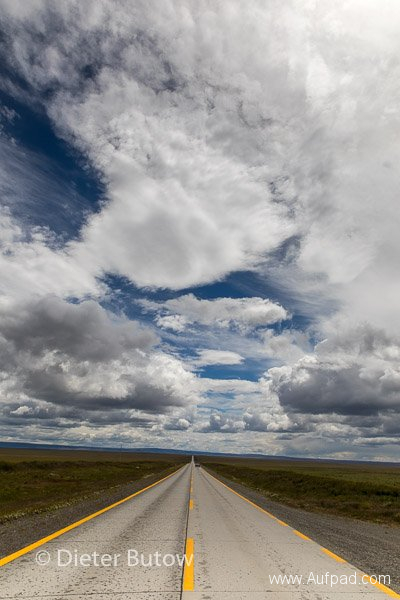 Arriving back in Punta Arenas we immediately drove to Toyota in the Zona Franca ( close to Navimag port) to see whether a vehicle service could be arranged – after their customary siesta, at 15:00 they could accommodate us.

So we drove to find Callegos Batterias in the hope to find replacements. Since the one good battery is a 145Ahr, we needed to replace both with the only available choice – a set of Turkish batteries. It is not quite what we would have intuitively selected, especially as they are identical, which meant some cable needed to be extended to fit them in. On the positive side the pair cost R 2978 – about half of what we had previously spent in Peru on Panasonics which had only lasted a year.

Toyota serviced the vehicle in the afternoon, but while adjusting the handbrake cable at the rear, the thread snapped off. We needed to be back next morning for it to be brazed as no spares were available for our model. 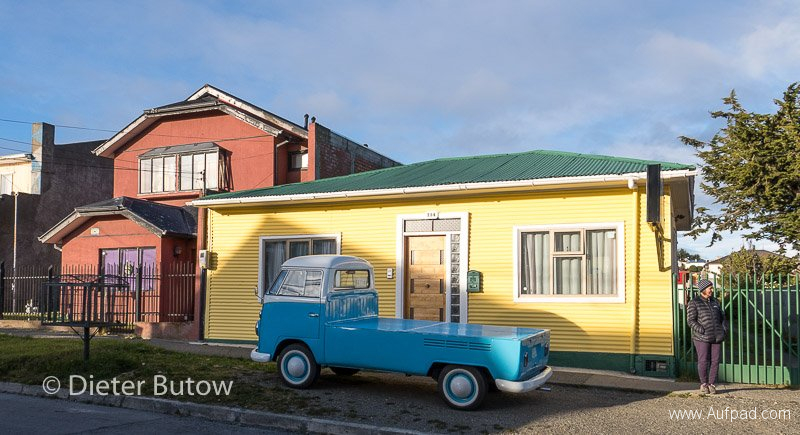 Luckily we got again accommodated at Hostel Aventure Austral where friendly Teresa checked us in. This gave us a chance to explore the city of Punta Arenas on foot and we took supper in a seafood restaurant – shrimps and Merluza. In the habour a luxury liner from Hurtigruten casted off – we never knew that they were also going into the Antarctic regions.

Just as we got ready to drive down to Toyota, Karin picked up a dental problem. With our knowledge of Spanish, how would we find a suitable dentist in a city we did not know? 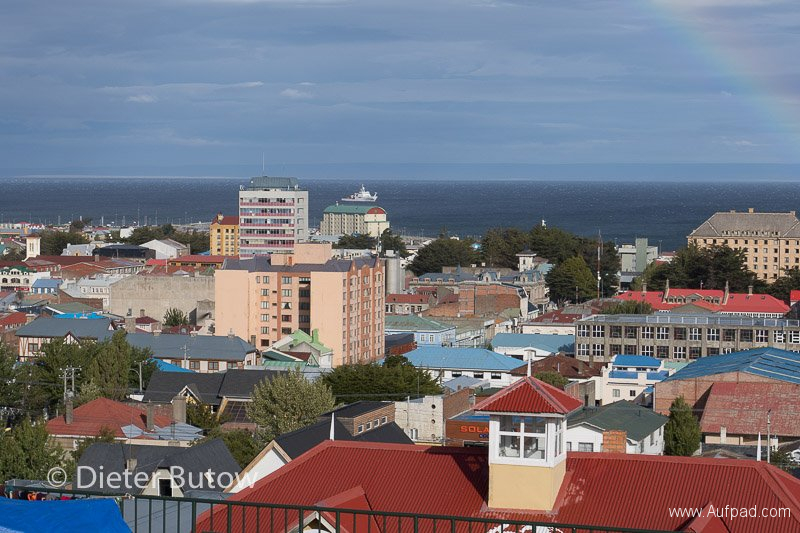 Toyota (here pronounced Toshota) came to the rescue! The friendly Venezuelan service assistant had a friend that is a dentista and Karin left by taxi to see Dra Pamela Eliana Luizaga de Munoz while I waited for Toyota to attend to the brake problem.

By siesta time all was done – Toyota cost R 2624 for the service, R 1231 for repairing handbrake, checking brakes, rotating tyres and replacing some lightbulbs whereas Karin’s treatment was reasonably priced as well.

We left Punta Arenas with the a good feeling –  things can be sorted out at this southernmost city of Chile. 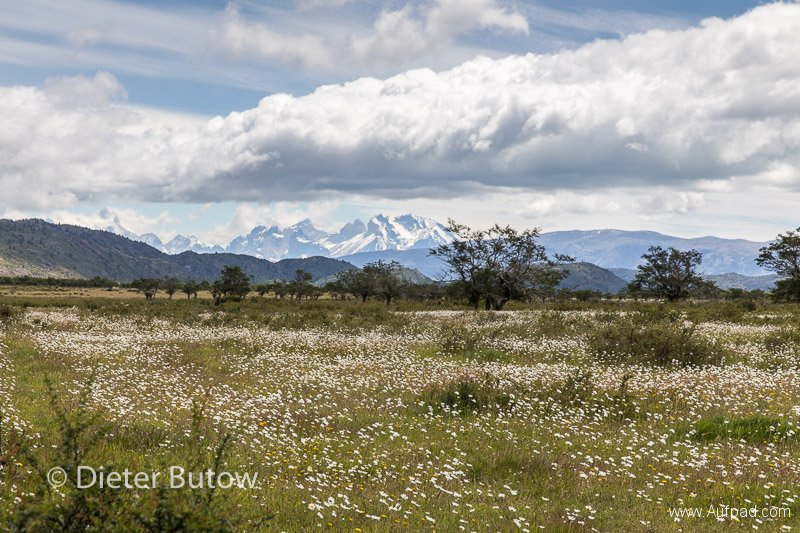 As we got closer to Puerto Natales again, the landscape metamorphosed from flat to hilly and the Andes mountains became visible again. With this change also the flora underwent significant changes.

For the night we ended again at Camping Güinos with Francisca and her husband and we got our laundry done for P6000 for 6kg loads.

Will we ever get used to the icy cold and wet conditions? Fortunately we could sit inside and share the communal kitchen with a number of backpackers and cyclists before creeping into our warm down sleeping bags which we had specially custom made in South Africa by Makoti Down Products – a manufacturer from Uitenhage we can recommend, their products proved robust and warm and they can manufacture to size.

Before we departed to the Torres del Paine we restocked provisions, as in the park no shops are available and we shall proceed from there back into Argentina. Since gas cycliders from our portable gas stove cost approx. 1/3 of what they cost in Argentina, we stocked up and then drove to the little town of Villa Serano just before the entrance to the park, drove through town past the last house with its red roof and carried on a track toward the mountains until we found a lonely wild camping spot on the bank of the clear Rio Serano that runs from within the Torres del Paine park. 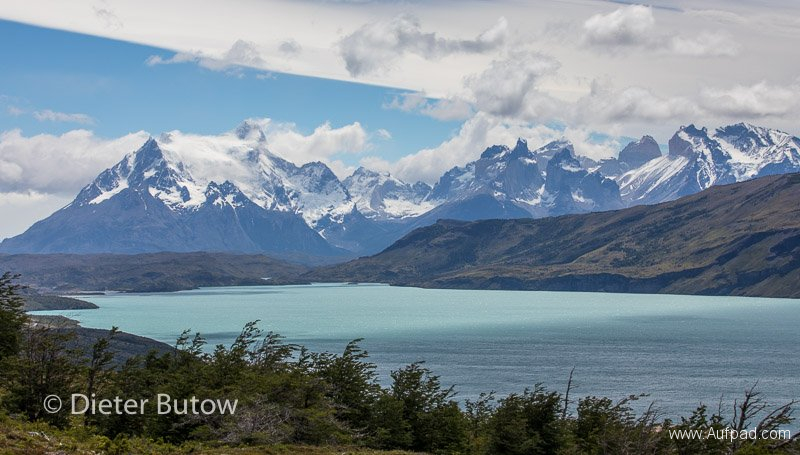 Of interest were the cleansing stations for anglers – Chile tries to prevent the spread of Didymo, a type of thin grass that cloggs the rivers. All equiment and angling boots/trousers need to dipped before and after the activity. 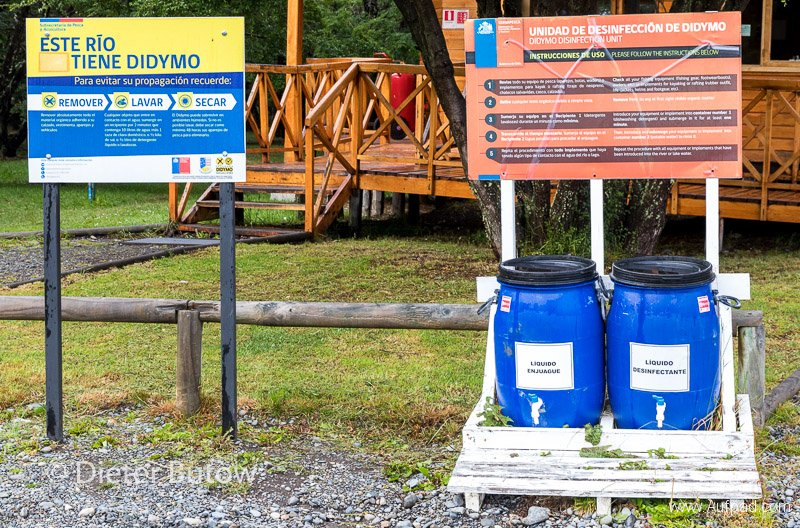 The only noises we heard during this quiet night were some cows, sheep and horses grazing close to where we found shelter. 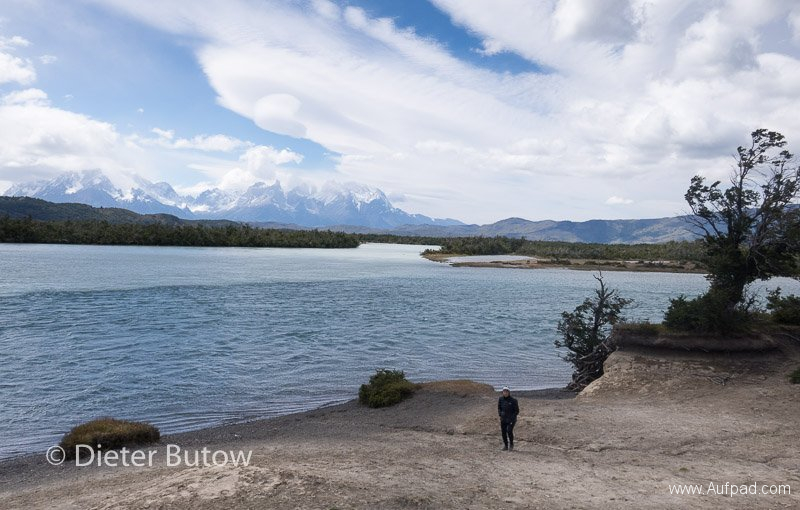 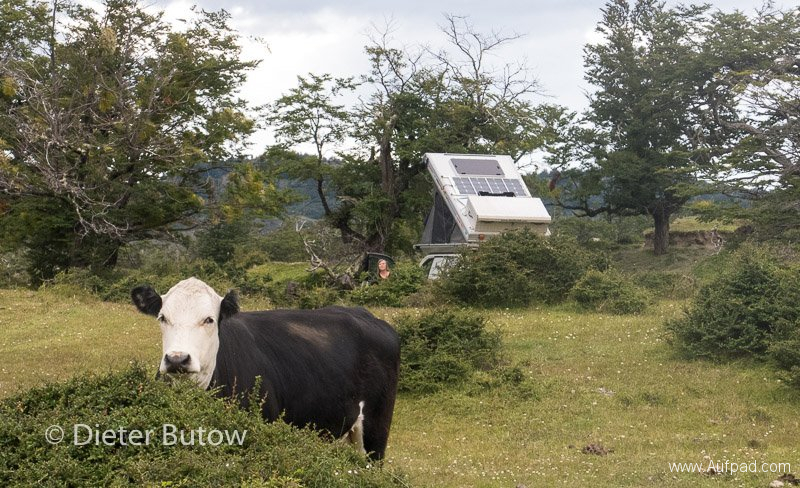 Before we entered the park the next morning we prepaid Camping Serano for the coming night and then drove in. At the Mirador del Condor we hiked up the mountain for 1 hour, enjoying the splendid views. On the way we saw the rare Porcelain Orchid as well as Guanacos and Andean hares. 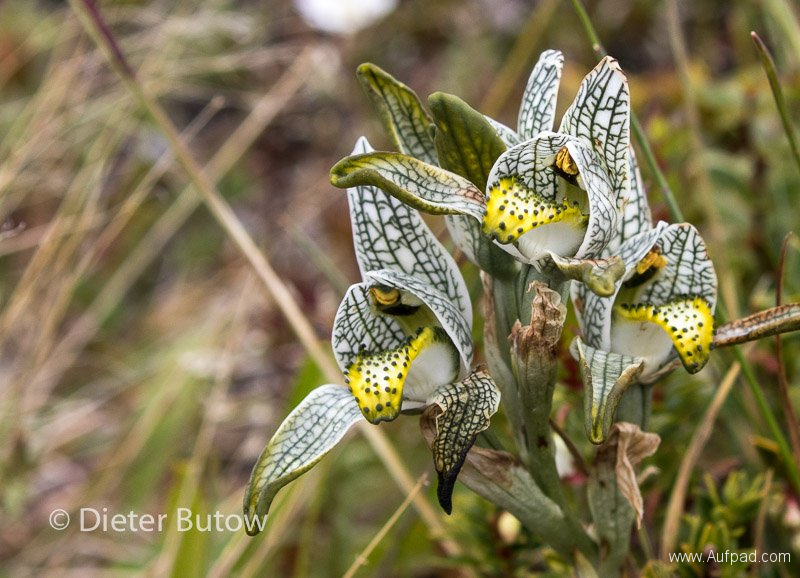 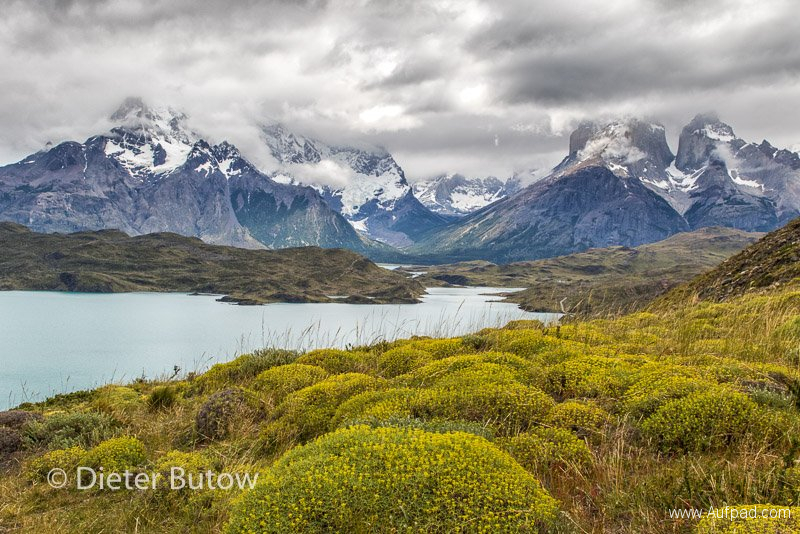 Next we visited Mirador Grey and walked to see the Grey Glaciar – rain made the walk a wet one and we spent some time hiding under bushes at the Mirador and waited for the rain to pass and were rewarded with a glimpse of the glaciar and some drifting ice. 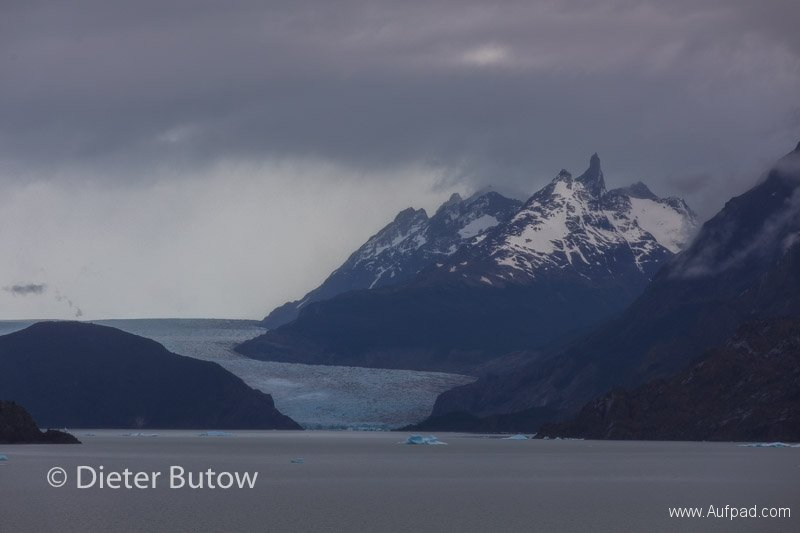 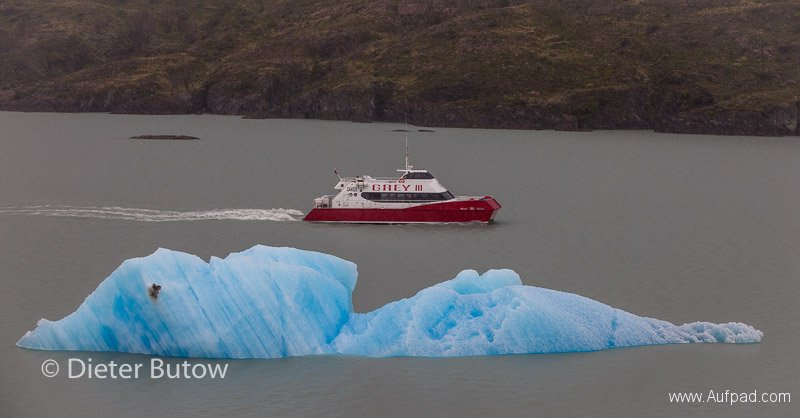 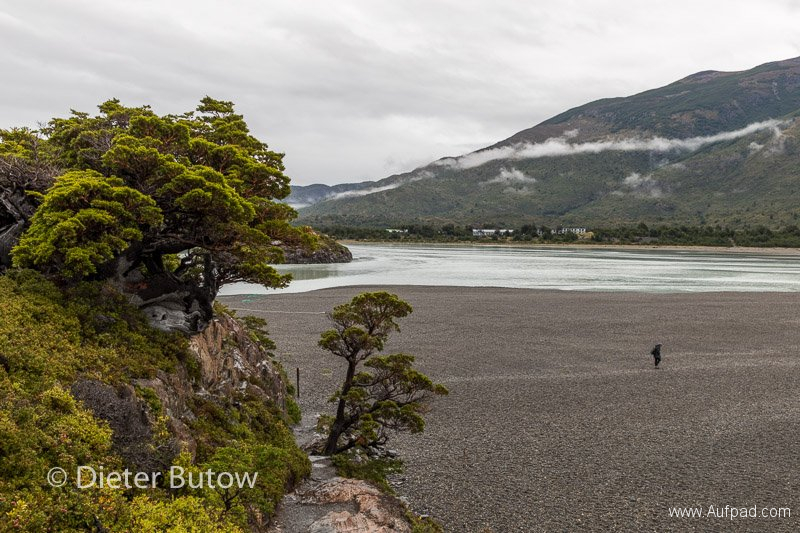 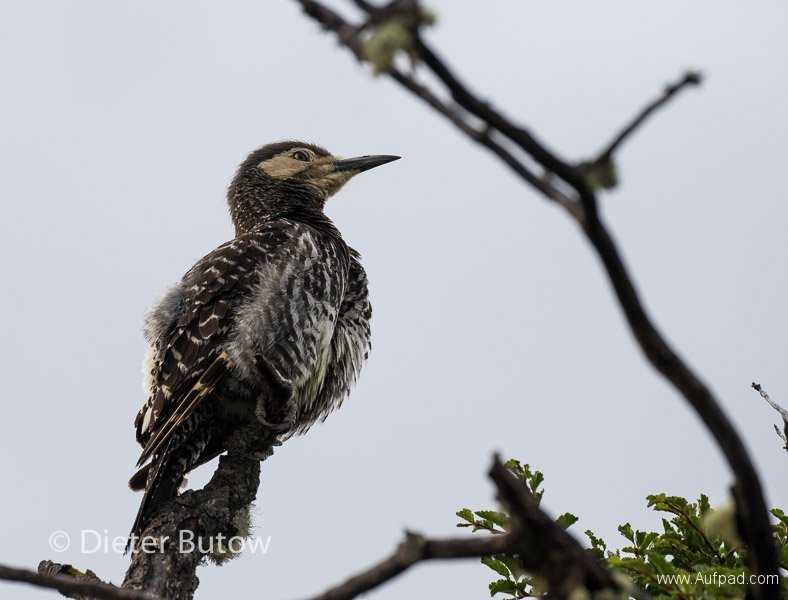 Back at camping Serano we appreciated their shelters to cook in and then it got late after Sven and Iris also arrived and the red wine flowed liberally.

We had to skip the hot shower the next morning as the generator, required to pump water, had not been started yet. We decided to leave early as it promised to be a beautiful day, but this might only last minutes here. Luckily for us we could do a Panorama or two with all mountain peaks exposed except Cerro Paine Grande, the highest with 3050m. 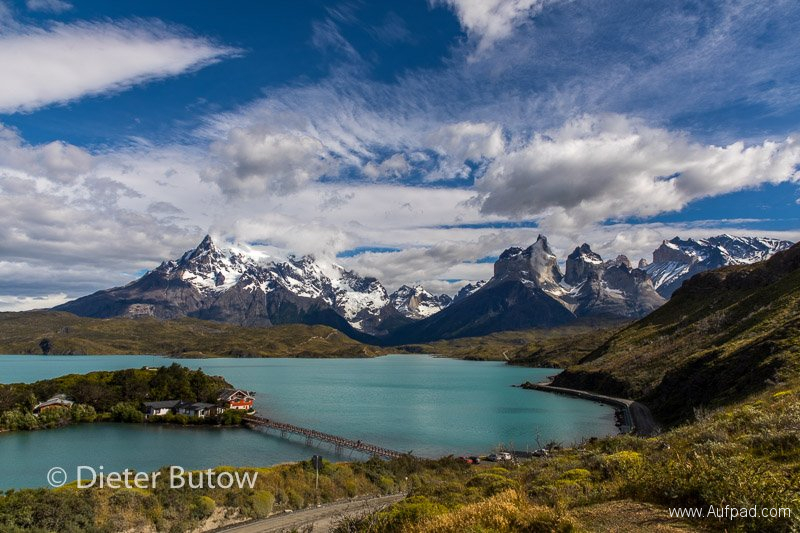 This was followed by a walk past Salto Grande, the waterfall up to the Cuernos lookout, a worthwhile point to see the glaciar as well as Condors on the way. 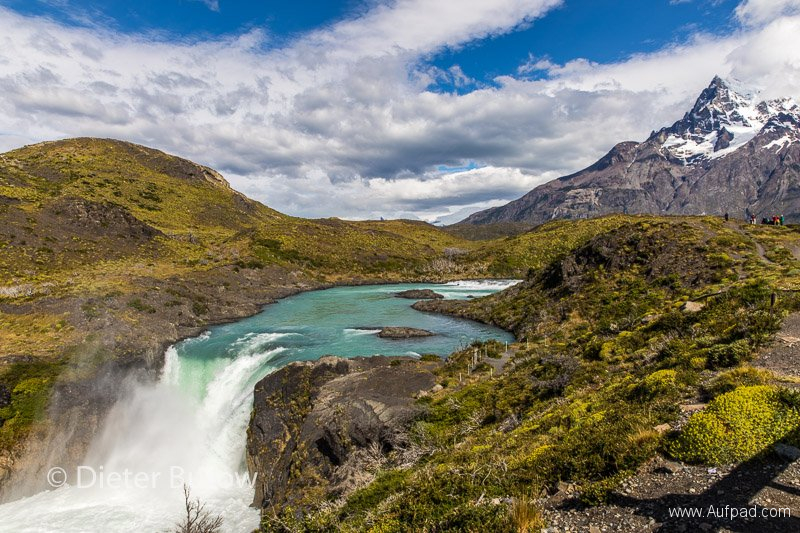 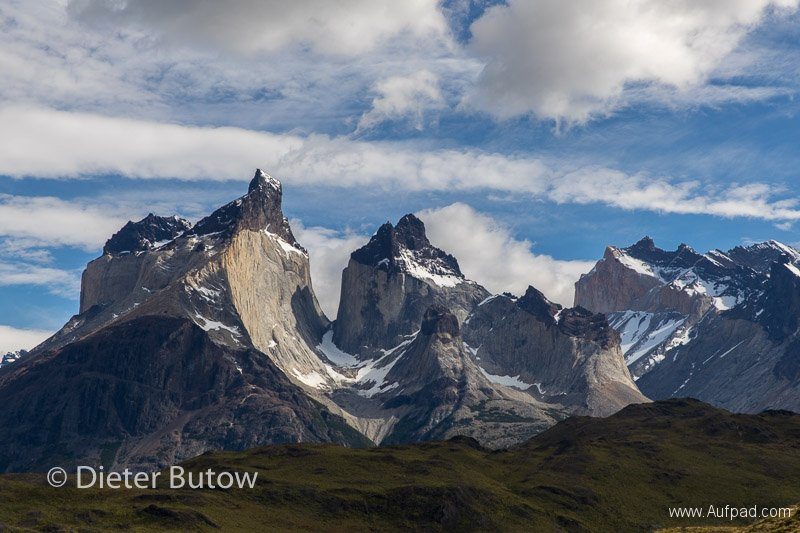 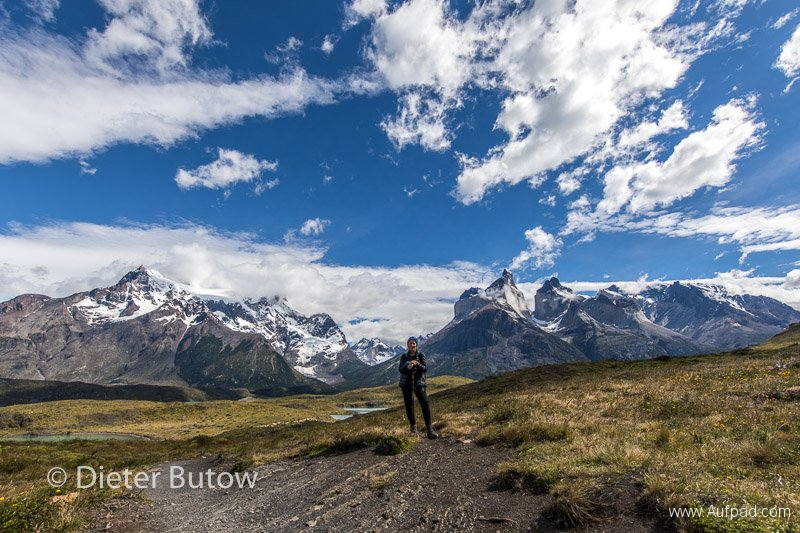 From our vantage point we could see an excellent example of an Aréte (Grat in German), that was formed through two glaciars running down two valleys, leaving this knife-edged aréte in it wake. 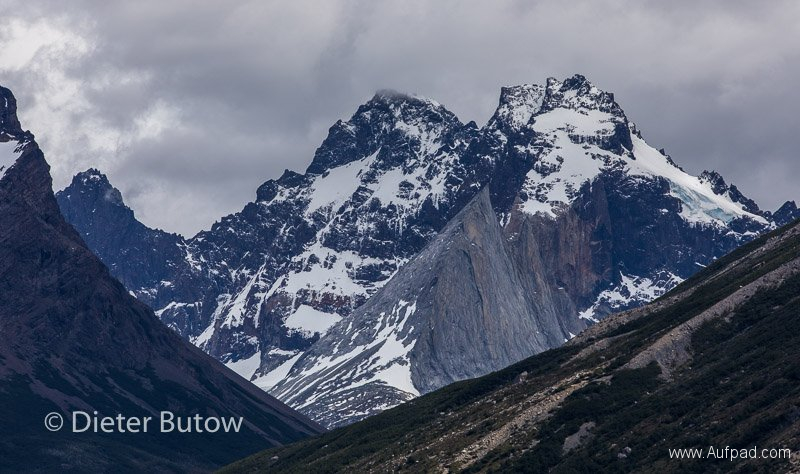 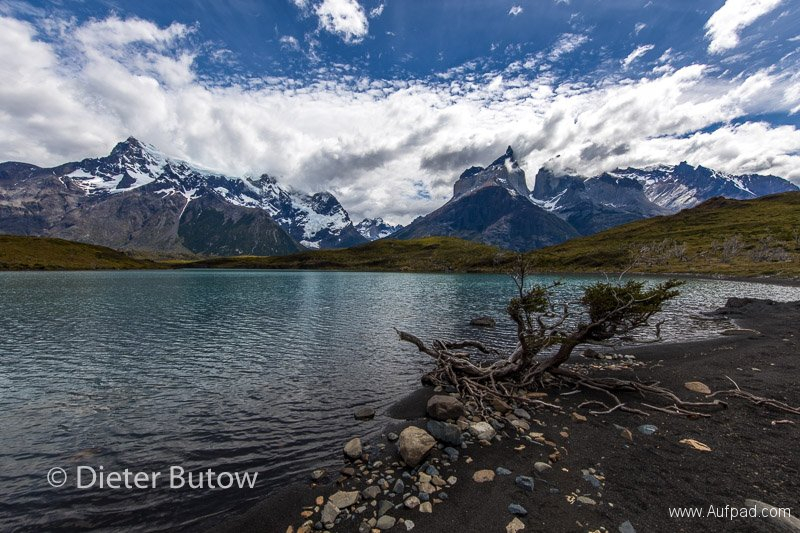 For the night we met Sven and Iris again on camping Pehoé, another site with shelters and warm showers and we enjoyed another supper in good company.

After a short trip to Lago Azul we decided to leave via the northern entrance toward Cerro Castillo. 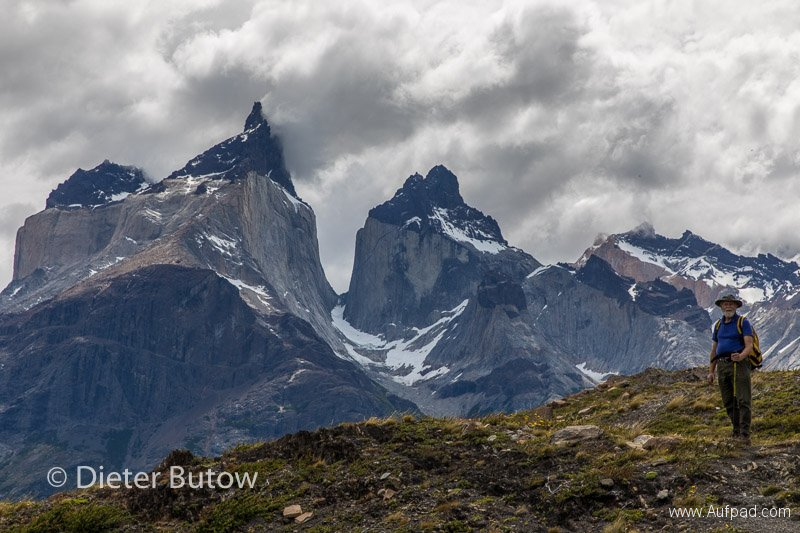 The border is at Cerro Castillo . Here we enjoyed a coffee and cake at the restaurant on the border and met Julia and Markus again, the Photonomads from Austria, we had originally met at the museum in Ushuaia.

Leaving Chile at this border post certainly was a lot less stress than entering at Bella Vista a few days ago.