We slowly made our way down Chile – a country some 4300km long and 756 000sq km in size and were looking forward to visit Valparaiso, whose Historic Quarter on Cerro Concepçion is a World Heritage Site. Since 1844 Chile is independent.

Next stop on our southbound route was P.N. La Campana, a park with the high  Chilean palms (Jubaea chilensi or the Chilean wine palm) and quiet, shadowy camping spots and walking trails. The park is 60km east of the city of Valparaiso which was next on our agenda to visit to see their prolific street art and murals. 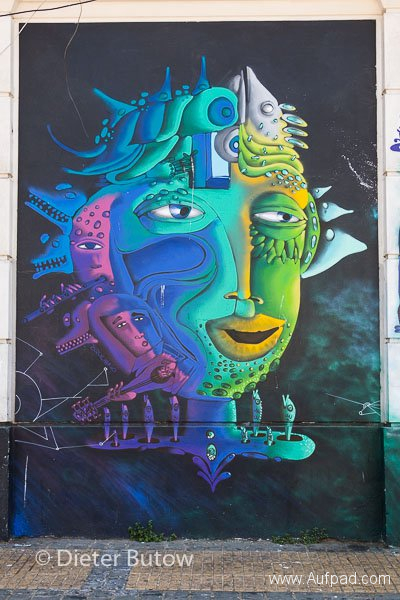 The vintage electric busses reminded us of the seventies in Cape Town, when the last of these were phased out in our city. 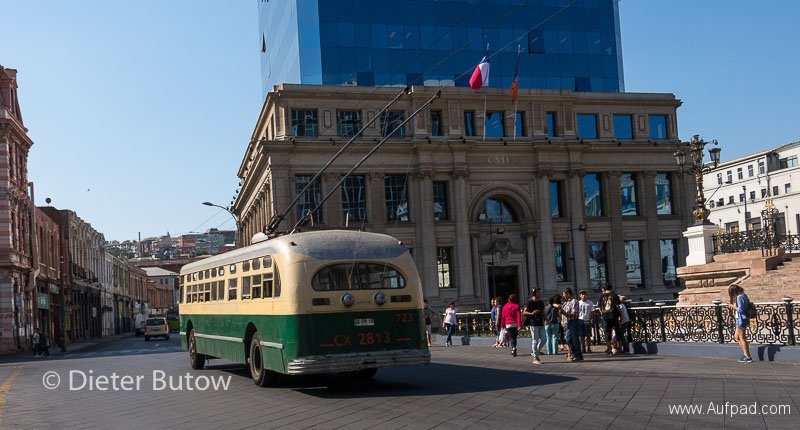 Valparaiso did not have any camping site and we ended up camping in the one-way street outside Villa Kunterbunt, known for hosting many bikers that pass through Valparaiso (they also offer a service of receiving and shipping motorcycles from here). 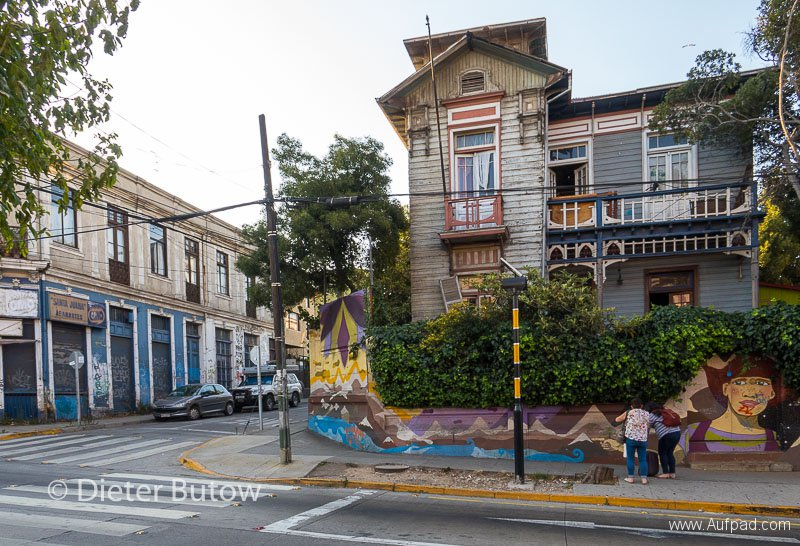 It ended up being one of the noisiest nights on the trip as the busses passed through this one-way street during the night. Worst of all was the fact that we could not enter the Villa during the night for a loo pitstop. However, as many bikers were accommodated here at the time, this was the best Martina and Enzo could offer us.

Valparaiso (also nicknamed the Jewel of the Pacific) is unfortunately known for not being the safest of destinations and we were warned not to flash around camera gear when visiting the city. We decided to walk and take one of the three old furniculars called “ascensores”, the Ascensor Artilleria, closest to us. 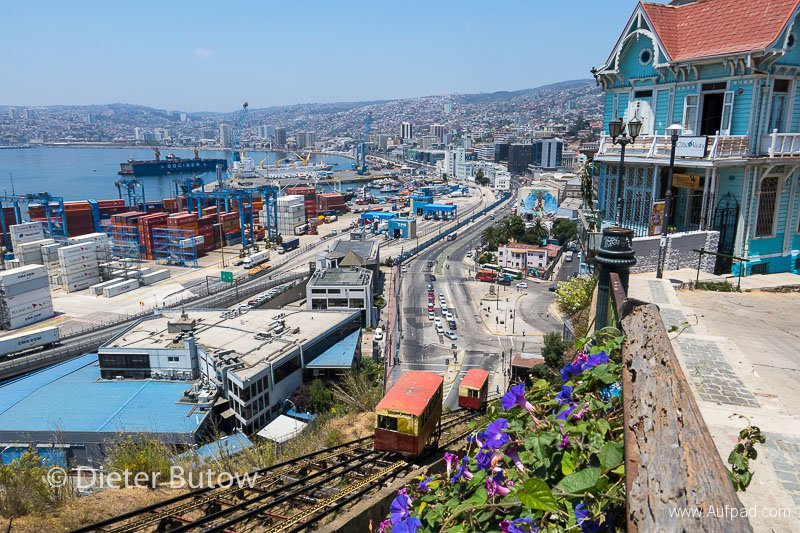 The charm of the old buildings and the many street art murals and graffiti certainly made for an interesting and worthwhile outing. 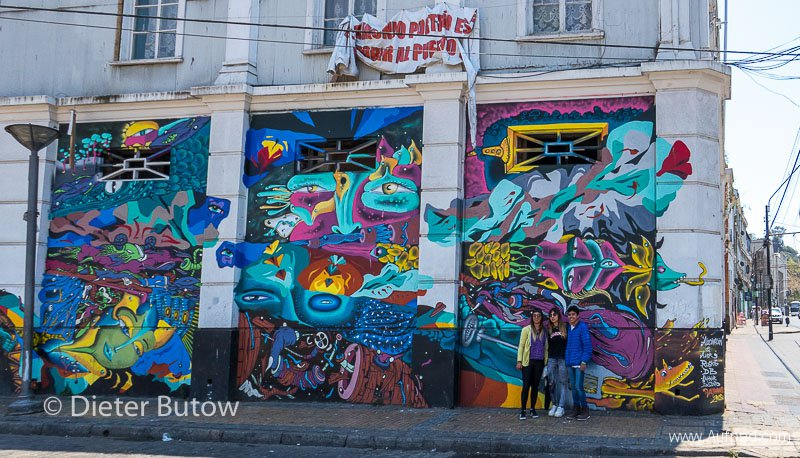 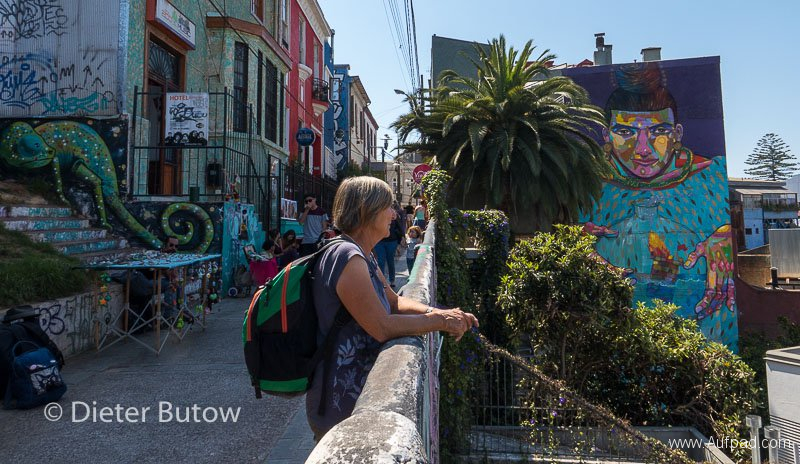 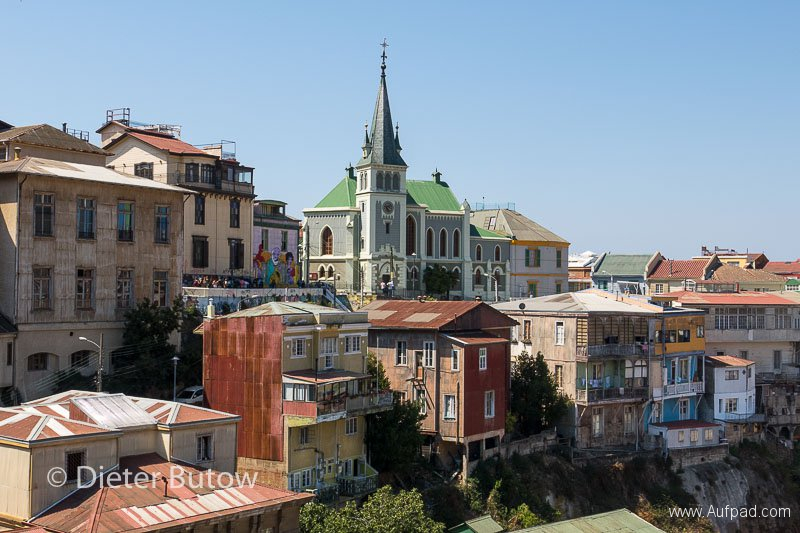 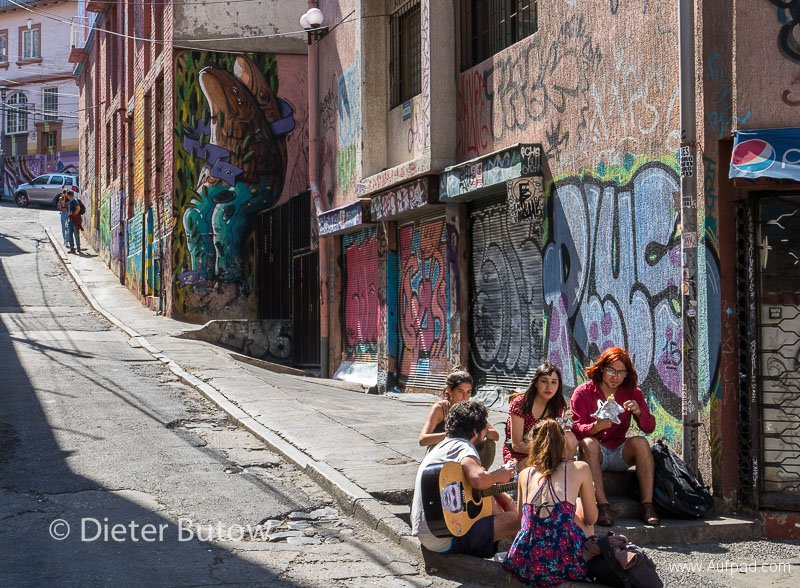 Continuing, our aim was to miss the capital,Santiago,  as we were not in the mood for more cities. From Valparaiso we went further south via the towns of Laguna Verde, Casablanca, San Antonio and aimed to overnight in the bird park R.N. Yali (a RAMSAR site) – at the gate, after we had driven many kms, we were informed that it was closed due to the bird flue – we were not excited, as a sign board earlier on could have warned us and would have saved many miles driving. Maybe we were expecting too much.

So we pressed on to Rapel, where we found a spot along the Rio Rapel at Camping Calicanto. All fine, except the next morning we found out the duchas are “natural” –no hot water as promised, as so often. En route from here we saw what looked like a volcanic eruption – it was the start of Chile’s most devastating fire in a hundred years and it would rage on for the next 14 days and would make it difficult at times for us to skirt around. 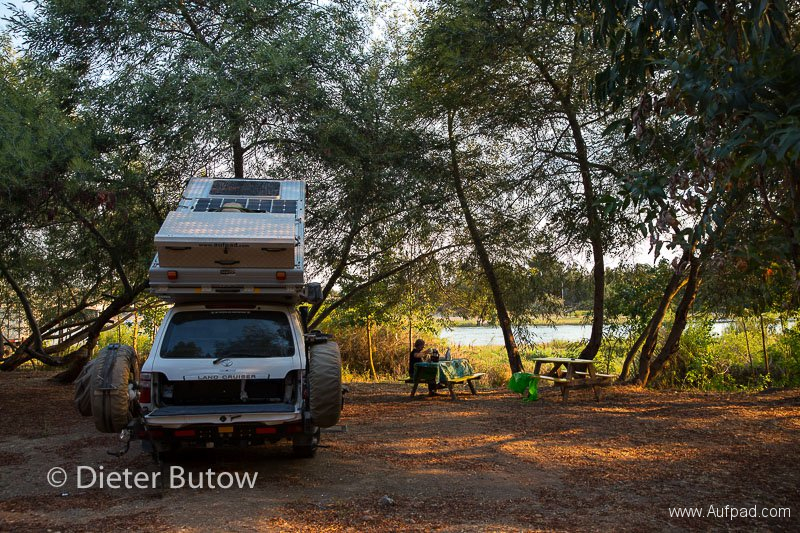 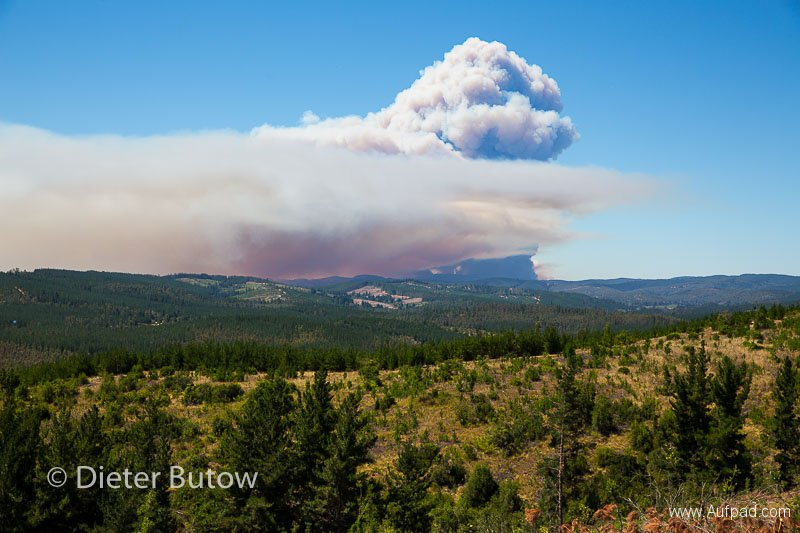 We proceeded towards Pichelemu on the coast –a town known for its excellent surfing wave ( at Punta de Lobos). The town was busy and abuzz with surfers and other holiday makers. 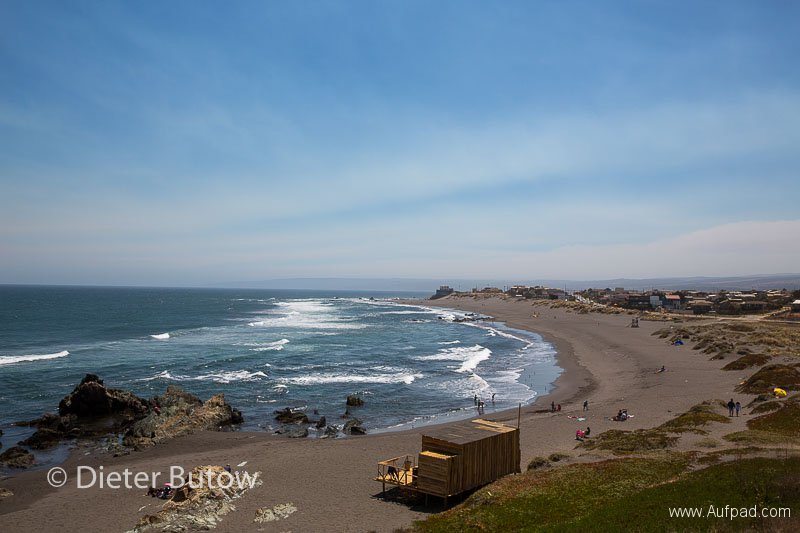 We continued inland at Bucalemu, then on to the Ruta de Viná, passed Paredones, Lolol, Santa Cruz to Teno. On the way we bought our first sweet and aromatic strawberries of the season, at farm stalls we ate Blueberry cake etc. Everywhere plantations of fruit and vineyards, many wine cellars were on this route.

At Teno we were back on the Ruta 5 PanAm for about 70km and turned off towards El Radal to reach the Parque Naćional Radal Siete Tazas – a stretch of rough dirt road ending in a beautiful wooded park area with many camping spots and the scenic seven pools ( 7 cups) where the Rio Claro drops down. We camped at Siete Tazas amidst holiday activities, but had no problem finding a spot to camp, then moved on for two nights to the quieter private San José de Frutillar camping y cabanas where we camped on the forest edge and enjoyed watching the parrots. 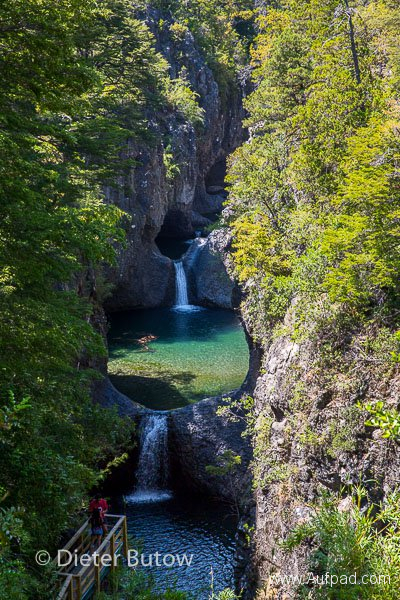 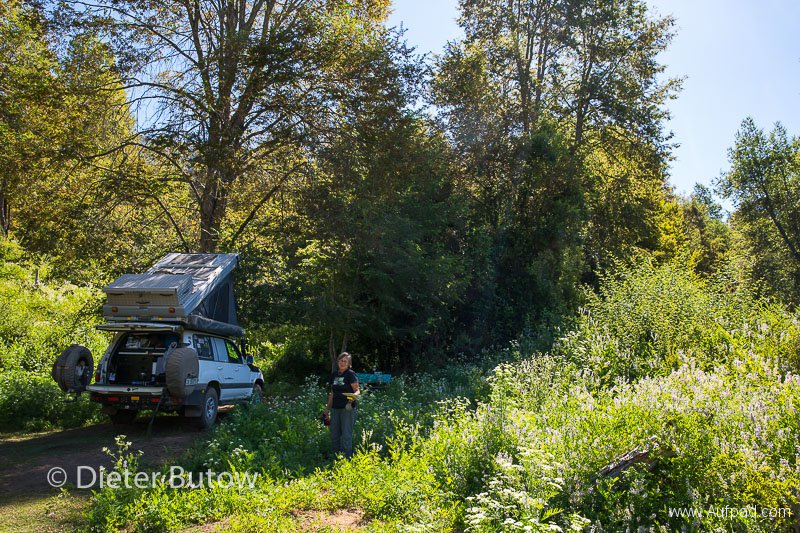 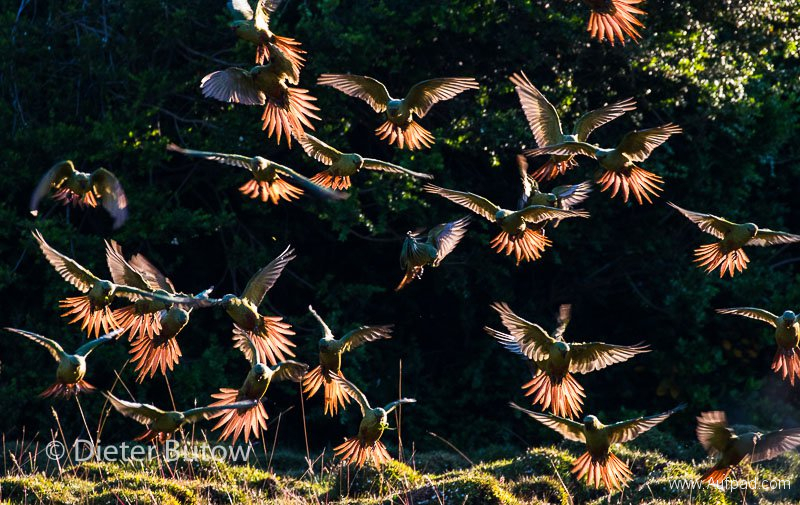 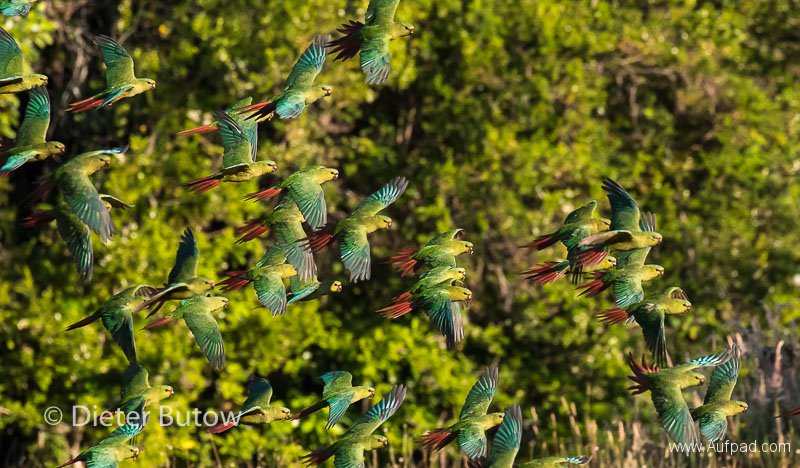 On the way we stopped at the Salto Velo de la Novia (Bridal Veil Falls) which had little water at this time and walked to the impressive 1000 year old Conagüe tree with a 9m circumference. 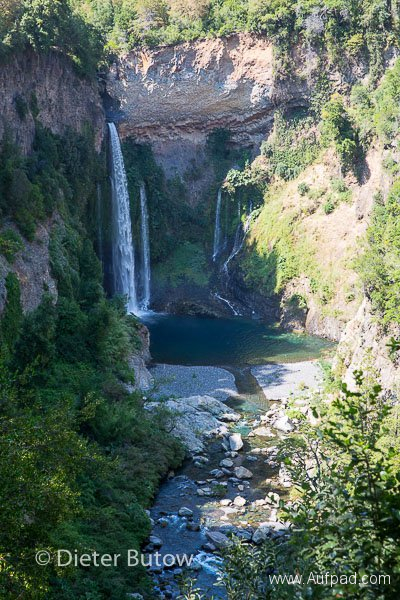 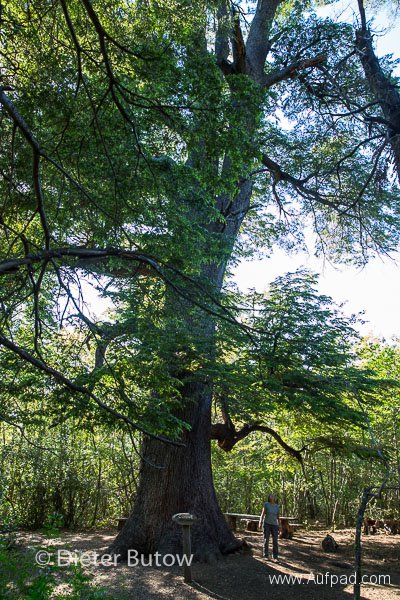